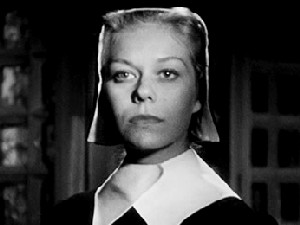 Two evenings round St Joan of Arc this week at the Barbican. First, Arthur Honneger's Jeanne d'Arc au bûcher on Thursday and on Saturday, Carl Th. Dreyer's The Passion of Joan of Arc with soundtrack by Einhorn. I was planning to write on Joan of Arc in music (specifically Walter Braunfel's opera ) and will, but got sidetracked by the role of film in music. But it's relevant because Dreyer's films use music in a very different way to the "Hollywood style", although Dreyer uses different composers in each of his movies.

Dreyer revisits the territory of Joan of Arc in Vredens Dag, (Day of Wrath, 1943) but with a very different perspective. Dreyer's Joan is unequivocally a saint, though she isn't the least bit romanticized. Her beauty is in her faith, shining past the suffering she receives on earth.  In Vredens Dag, and old woman known as Heklot's Marthe (Marthe with the owner Heklots) is burnt at the stake for being a witch, though she comes over as a frightened rather simple minded old lady. In Joan of Arc, Dreyer highlights Joan's tormentors as individuals, albeit in a stylized fashion, as in a medieval triptych. The "action" is in Joan's soul.  In Vredens Dag,  the tormenters are the good folk of a clean living, organized, peacable community. This film is a study of relationships on a group of different personalities. Yet again, Dreyer uses black and white for meaning. This community is austere and conformist. Everything is black and white for them, not only their costumes and spartan taste in decor.

Absalom is the elderly local preacher, who is probably a genuinely good man, within the confines of the system.  He has an extremely young wife, Anne, whom his mother hates with such ferocity that she's more likely to end up in hell than heaven. "This is the house of the old", says Absalom, while Anne withers into desiccation.  Then Absalom's son, Martin, returns. Like Anne, he's repelled by Marthe's murder but they can't object. Soon they fall in love. The "rising of the sap" in nature. Anne is reinvigorated and starts to stand up for herself.  One stormy night, Absalom returns from a storm, saying he's felt the chill of death. Since Anne had wished him dead, now she thinks maybe she has occult powers after all. In this communiuty, if you want anything other than the norm, you must therefore be primed by the devil. 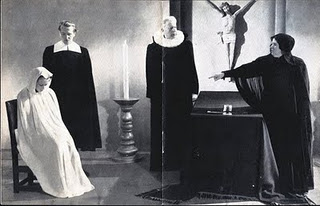 Marthe must be a witch because she keeps denying it, so she's tortured until she proves her accusers right. Flawless logic. No evidence needed. "It's those eyes" says the mother-in-law from hell of poor Anne, whom Absalom married when she was barely a child. (who is the real villain here?) Eyes that Absalom sees as innocent, eyes that Martin sees as mysterious. Since Anne has been brought up in this community, she thinks that she too must be a witch. When Absalom drops dead, mother-in-law accuses Anne of witchcraft and murder. Knowing that she can't hold Martin, Anne has nothing to lose and declares, yes, she's at fault.

Vreden's Dag was made in 1943 whike Denmark was neutral, but surrounded by Nazis, so it's easy to read anti-Nazim protest into the film. But I think that's grossly delimiting. This situation can occur anywhere, any time. Indeed, in the age of the internet it's even easier to stir up mobthink and ignorance.  In Vredens Tag, the locals at least know each other and can doubt, though they don't act. The original story this movie is based on was an apparently true story that happened in Norway in 1623. Bigotry knows no borders. The scary thing is that even the victims are conned into losing faith in themselves.

Back to the music. Glorious "medieval" plainchant marks the opening, where Dreyer shoots an ancient manuscript that introduces the story. But then, silence for the most part. Only atmospheric sounds, like the ticking of clocks, or footsteps. You must be watchful, always alert, just as Anne is. Very occasionally, flourishes of music. When she falls in love, she starts to hum, and there's music when she and Martin have trysts. The compser is Puol Schiebeck (1888-1949), old enough to have studied with Carl Nielsen, yet this score is modernist enough to sound avant garde even today. Listen to the music in the sequence where Anne is thinking of Marthe at the stake. Turbulent cross currents, not obviously disssonant, but deeply disturbing.  Listening to Schiebeck's score, and indeed to Wolfgang Zeller's score for Vampyr (described here with download) I'm less convinced by Richard Einhorn's 1994 Voices of Light, used in the DVD rerelease of Dreyer's Passion of Joan of Arc. But maybe audiences today need film music with their films.
at November 02, 2011