The Passion of Joan of Arc Dreyer - the movie 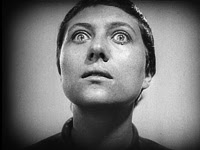 Full download of The Passion of Joan of Arc (1928) directed by Carl Th. Dreyer. Click here to run. This one is SILENT  and over 70 years old, out of copyright in Europe. It's being shown tonight at the Barbican, while Marin Alsop is conducting the LSO in a performance of Richard Einhorn's Voices of Light written in 1999 to accompany the film. If you buy the DVD release you get the movie plus Einhorn.  Personally, I'm inclined towards the silent version. Firstly, silent makes you concentrate on the intensity of the images, almost a spiritual experience, which is what Jeanne is going through in the movie. Secondly, from other Dreyer films, like Vampyr (full download HERE) and Vredens Dag (description HERE) it would seem that Dreyer conceived his movies with minimal sound. Although the Einhorn soundtrack is interesting, it's an add-on and isn't that overwhelming as music. 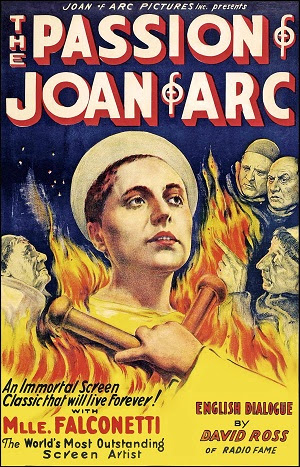 Joan is played by Renée Jeanne Falconetti, billed as "Mlle. Falconetti" for reasons unknown. She was a stage artiste, so making this film must have been a kind of ordeal, holding a pose for an eternity for the camera, then slowly changing expression so every muscle twitch is recorded. Look at the intense lighting too. At the end of a day's shoot, her eyes might have stopped working and  her brain given her migraines. So maybe Falconetti was a hero, like St Jeanne. For posterity she'll be remembered without makeup, stressed out and her head shorn.

Look at the rest of the cast list. One of the prosecutors is played by Antonin Artaud, theorist of the Theatre of Cruelty. That doesn't mean S&M but the idea that pushing boundaries makes us challenge assumptions. So the connection between Dreyer's intellectual austerity and Artaud's theories goes pretty deep, All the more reason for a silent Passion of Joan of Arc. Sound distracts. Brian Ferneyhough explains his music in terms of Artaud theories. Now, there's a thought - a Brian Ferneyhough soundtrack to The Passion of Joan of Arc. He's good with complex "medieval" polyphony too. You can bet his version wouldn't be anything like Einhorn. I'll be writing more soon on Ingrid Bergman's Joans of Arc, especially her version of the Arthur Honegger Jeanne d'Arc au bucher (Giovanna d'Arco al rogo) directed by her then husband Roberto Rossellini in 1954. When I wrote about the Barbican Jeanne d'Arc, (see HERE) I hadn't seen this film, which is much overshadowed by the famous Bergman Joan of Arc movie made in 1948 by Victor Fleming. The Fleming movie is staightforward Hollywood. The Rosselini film is art. Read about it HERE and come back for more!
at November 06, 2011