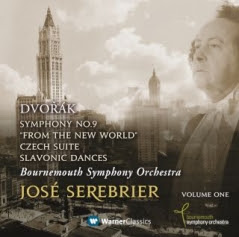 When Dvořák went to America, he was struck by the Shock of the New. In 1893, there was no TV, no film, no mass communication, so the impact of this strange new world must have been extreme. Dvořák's Symphony no 9, "From the New World" op 95 is so familiar now that it's thrilling to hear this new recording, first in a series of Dvořák symphonies from Warner Classics. José Serebrier conducts the Bournemouth Symphony Orchestra, one of the best outside London (and good enough to show London a thing or two!). If the rest of the series is as good as this disc, Bournemouth will get the respect it deserves.

Serebrier has conducted and recorded Dvořák many times, but this performance is electrified by a glorious sense of discovery. Might this have been what Dvořák and many millions of Europeans before him and after have felt when they encountered America?  There are many more venerable recordings, but this bursts with open-hearted exuberance. Serebrier shows what America might have meant for Dvořák, a man steeped in European tradition, from a land-locked country. Expansive, surging crescendi, suggesting wide open spaces, not just physical but as creative opportunity. Vigorous rhythmic power, evoking the liveliness of American "can do" enterprise. The Bournemouth Symphony Orchestra here is very bright, and very brassy, more like an American orchestra, which suits this symphony well, and they sound invigorated.

Dvořák's big codas dazzle, creating large forms, but above all, Serebrier shows how the essence of this symphony lies in lyrical detail.  Mountains, plains, cities and technology - do some of these rhythms suggest trains, and machines ? Yet the symphony's finest moments stress individuality, either human or from nature. Hence the delicate "vernal" motifs like the wonderful English horn motif, now known as "going home".  It wasn't borrowed music but Dvořák's own, representing, perhaps, idealistic innocence. That's why it became a spiritual, not the other way round. Serebrier separates notes so each is heard clearly. This creates a magical sense of wonder, but hints at fragility. The Largo dissolves with exquisite tenderness. Even in the vigorous, confident Allegro con fuoco, the pure, clean sounds of solo instrments shine. The sound recording is so good you can hear piccolo and triangle ring. This is where studio recording proves its worth, for that pristine clarity is very much at the heart of this symphony.

It's prescient that this Volume One in Serebrier's Dvořák series with the Bournemouth Symphony Orchestra starts with the Slavonic Dance op 46 no 1 (presto) because the first chord explodes! It's followed by an unusually  alert reading that feels like dance on a grand scale, yet even the tiny whips - like fast moving footsteps - are deftly precise. Surrounding From the New World with the Czech Suite op 39 and the Slavonic Dance op 72 no 2 (allegretto) is perceptive, for it underlines the idea of dance in the symphony.  Dance is rhythmic pattern, and movement, and From the New World uses ensemble patterns as well as motivic freedom.  Dancers in groups, dancers solo, all functioning in a complex whole. You can almost visualize an American city with teeming traffic in a very un-European grid of streets. Or buildings as hives of activity. Maybe that's what Dvořák really meant about using "Indian" sounds, stomping ostinato as a rhythm of life.