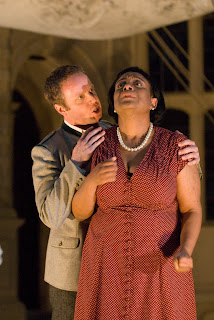 Preparing for Alfredo Catalani's La Wally at Opera Holland Park, I was struck by its potential. It's an Italianate Der Freischütz. The music may be good-natured Romantic, but the heroine, Wally is extraordinary. She's an elemental, part-woman, part nature spirit, lives alone, in the wilderness, surviving, one imagines, on sheer force of will. Compared with Wally, Carmen is a wimp. This story isn't set in the high Alps for nothing. The mountains loom upwards towards the stratosphere. Extraordinary heroine, extraordinary setting : mountain peaks, frozen glaciers, crevasses, snowstorms and an avalanche. And then the star herself, Gweneth-Ann Jeffers, who created a sensation in 2010's OHP La Forza del destino. Jeffers is unique.Her voice rises fearlessly to any challenge, and is capable of exquisite colour and sensitivity. And she has a personality to match and stage presence. This woman is a born diva and can act so well she can fill a stage on her own (which she does in Act IV). Potentially an ideal Wally.

But was the Opera Holland Park production team working from the same score? There's almost no way anyone could stage La Wally realistically, for a narrative like this demands suspension of disbelief. Landscape settings on this grand scale would have been technically impossible in Catalani's time. Realism in opera isn't "tradition" but aberration. This opera is surreal nature fantasy, but that doesn't mean banal. Designer Jamie Vartan sidesteps the issue altogether, using a painter's dropcloth, suspended by guy ropes that remain clearly visible throughout and threaten to trip the singers at several points. Only in the very end does the dropcloth make sense, when it's manipulated to look like mountains, but by then the opera's nearly over. Until that point, we're staring at the carved portico that remains of Holland Park House which completely  undercuts the idea of open horizons and wilderness. Since the opera itself comprises two distinct parts it might have been more effective to realise the difference with different settings, Perhaps filmed projections would work in the first part, contrasting the banality of village life with the turbulence of nature in the mountains? Even a good old fashioned painted backdrop of mountains and kitsch, so the singers can do their thing unburdened..

The staging is so awkward that if you didn't know the plot you'd be lost. Gellner (Stephen Gadd) chases Hagenbach (Adrian Dwyer) up to the peaks and pushes him into a crevasse in the glacier. Wally struggles up the slopes, and pulls him out. Danger, urgency, heroism. If this were a Leni Reifenstahl mountain movie, you'd see slippery ice-clad precipices, and bursts of snow as crampon digs into rockface. (I'll write about Riefenstahl's movie The Holy Mountain next week). Catalani's music describes the urgency and struggle. Whirling figures like wind, trudging staccato, tearing, screaming figures from the string section, alarums from the brass.  Instead what we get at OHP is a trestle table not three feet high, covered with cloth. Gadd scuffles with Dwyer who rolls onto the other side of the table. 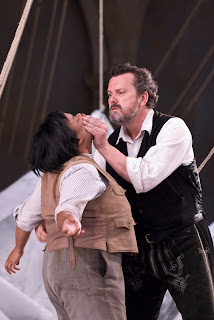 And what of Wally, that extraordinary creation? Director Martin Lloyd-Evans keeps Jeffers busy doing things like change her clothes. .As Wally's music shows. It's passionate, throbbing with frustration. That's why Ebben? Ne andrò lontana is so poignant. Wally knows what leaving civilization means. Wally is a complex, confused personality who takes eveything to extremes. Which is why she overreacts to the silly game in the tavern. And why she has no qualms risking her life to save Hagenbach. Jeffers sings with great force and depth, but she's directed to move in an inhibited way, as if she's domesticated and gussied up. Pearls? By nature she's an Edelweisss. Maybe this direction is trying to show how Wally is trapped in the village, but it doesn't bring out the exceptional vividness in her character. I've been following Jeffers's career for about five years and am convinced from past form that she is capable of much more than this. Great potential, underutilized, a wasted resource.

If Jeffers isn't able to act much in this production, her singing makes up for it. Her Act II and Act IV arias are superb, emotionally nuanced, richly coloured.. Jeffers's Wally thinks and feels deeply, and you "hear" the role much more than the largely cardboard way it's shaped in this production. Jeffers sings abroad these days but she really should be groomed for greater things in this country. She's an asset British opera should nurture properly.(and yet another Oxford Lieder Festival graduate).

Generally strong cast.  Adrian Dwyer and Stephen Gadd sing Hagenbach and Gellner better than they are called on to act. Stephen Richardson's Stromminger is weighty - pity the character dies after Act 1. Alinka Kozari's Walther is bright and wittily characterized. Charles Johnston was Il Pedone and Heather Shipp a sparky Afra.

Peter Robinson conducted. Catalani's music isn't sophisticated, relying more on atmospheric effects to paint imagery. Horns on one side, trombones and trumpet on the other, "calling" to one another as villagers in the Alps might do. The sound of distant hunting horns, long booming alpenhorns (trombones), the sound of cowbells, bright sunny flute motifs, not-quite-Ländler dances, just bucolic enough to be humorous. Yet when the story develops into tragedy, Catalani's writing leaps into higher gear. Stormy passages, dread with foreboding, reinforcing Wally's arias. The avalanche roars through the orchestra. We see an acrobat hanging from a rope on stage but the music has already told us that Wally and Hagenbach have been so overwhelmingly engulfed that no trace of them remains.

Get to this Catalani La Wally at Opera Holland Park because it's unlikely that there'll be another production any time soon. Don't worry too much about the staging. Focus instead on the singing and the orchestra and enjoy. I'm probably going again Wednesday. A more formal  review is here in Opera Today.  My focus is on the opera and its potential, which is why I avoid doing shallow.

Why write this lengthy "review" when a formal version will follow? As for projections, I wonder how one might do those in daylight.

One of the great risks for reviewers is to write about what they have seen too soon.....

Why ? Becuase I continue to develop my thoughts long after first impressions. Most reviewers don't or can't. If you want superficial, you can find that anywhere. I'm more interested in generating ideas.

As for projections, you're right at OHP where it doesn't get dark til the show's over. But again, I'm trying to stimulate thought not provide absolute solutions.

Perhaps. I would that since you are reviewing people's work, you ought to formulate your thoughts, good or bad, before committing them to paper or the internet. Just an opinion of course.

Why should people be forced to form opinions only in the way that you specify ? This is a gorgeous opera which needs to be done more often, but it's a tough one to do right. All the more reason to respect analytical opinion of any kind. If anything I've been generous because I believe in the OHP ethos.

I am not trying to force you to do anything and I am certainly not criticising your support of OHP or indeed, the review itself.

I am merely suggesting that since you are going to do a "formal" review, it would be better, in my opinion, to create a piece that collected these thoughts into a cohesive piece; whether good or bad or both.

It is a free country so you may do whatever you wish. I am merely looking at it from a different point of view.