Growing up with Bruce Lee 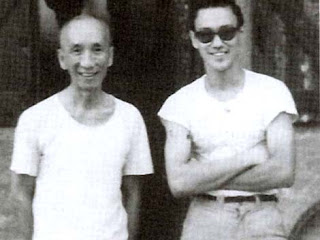 Once I could impress punk kids by saying I knew Bruce Lee. Well, sort of, and in any case better than they did. Although I passed his house often, the closest I actually got (ten feet) was being on a ferry with him. He strode on board and sat like he owned it. Everyone else melted into the background so he could have his privacy.

Everyone knew Bruce Lee because he was an extremely famous child actor. We all grew up with his movies, so he wasn't at all unknown when he came back to Hong Kong flush with success on US TV. His Dad was a star, so he was totally part of the Cantonese movie tradition. Instead he created a whole new ethos, single handed. What was so shockingly innovative about him was that he was one of the first guys who confronted western supremacy and won. Unless you have lived in a colonial environment you have no idea how racism corrodes. People avoid it by not engaging. Bruce Lee confronted it and beat it. There were hundreds of kung fu movies before him, usually about "defeating the Qing, restoring the Ming" ie traditional Shaolin context. Then along comes Bruce Lee and it's modern, political and turns the genre on its head. Bruce Lee  beats white guys, black guys, Japanese, mobsters, etc.  "Fists of Fury" was a cultural watershed. Nowadays underdogs everywhere identifiy with Bruce Lee because he represents the hope that anyone can beat the odds. Bruce Lee has changed the world.There is a lot more to Bruce Lee than kungfu.

Here he is with Yip Man, his kung fu master. It's quite an unusual photo as most kung fu acolytes are humble, because the "way" is to win by purity and not ego. It's as spiritual as physical. And there's Bruce, muscle bound and strikingly western-looking. No wonder Yip Man is bemused. When Bruce Lee died, the city was stunned into silence, and then mass hysteria. Thousands turned out for the procession. The sight of Lee's white wife and kids in traditional Chinese mourning garb was sensational. Hard to explain the significance but she was making a statement, and it earned her enormous respect.

There is a movie where Bruce Lee aged 15 plays an uncontrollable rock'n'roll brat who is tamed by a scholarly teacher played by Yam Kim Fai, the opera singer,  as usual in drag. Above is a still from the movie.早知當初我唔嫁 "If I had known about marriage" 1956.  "Do you hit kids?" he asks Yam Kim Fai. "It's uncouth" she says.  Yam Kim Fai and Fong Yim Fun, two of the biggest Cantonese opera singers ever, sing a duet based on the tune known in the west as "with a knapsack on my back".Yam and Fong (Bruce's stepmother) fall in love, but she's pushed into marrying a straight guy instead. But all's well and ends well. Fong becomes a nun!
at July 07, 2011