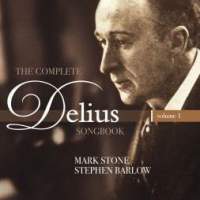 Frederick Delius spent most of his adult life outside Britain. His influences were European rather than parochially English. His parents were German, and he was a native German speaker. Culturally he was a citizen of the world. What, then, makes Delius an “English composer”?

The Complete Delius Songbook is another ambitious project from small, independent company Stone Records, who gave us the first George Butterworth Songbook (see review HERE) and the new Hugo Wolf Mörike Songbook. (review HERE). Such enterprise deserves respect. This disc is the first in a two-part series which will include songs published only in the last few years, and some in new singing translations.

Unlike many British composers, Delius used non-English texts extensively. He was, of course, a native German speaker and learned enough Norwegian to socialize and attend plays. Indeed, of the 61 Delius songs for voice and piano that survive, many are settings of Norwegian poetry. Delius was close to Edvard Grieg, so would have been acutely aware of Grieg’s settings of Bjørnstjerne Bjørnson, and indeed of alternative settings of the same poems by Emil Sjögren, Halfdan Kjerulf and others.

Bjørnson was a contemporary of Grieg and Ibsen, one of the great figures whose championship of Norwegian values and language created a distinct Norwegian identity, making way for eventual independence. He wasn't an antique figurehead, and certainly no bucolic rustic. Even Ole Bull, from whom Grieg learned so much, was far more than a country fiddler.

Delius learned to write original music with the spirit of purity inherent in folk music, rather than transcribing traditional singers as Percy Grainger did. Hence, the charm of Delius's Seven Songs from the Norwegian (RT V9) lies in their utter simplicity. Grieg sets the same poems with much greater subtlety, the piano part deliciously pristine.  On this disc, Mark Stone sings "Twilight Fancies" or "The Princess looks forth from her maiden bower" with utter sincerity, so when his voice reaches a crescendo on the word "soar", it's a nice contrast with the understatement elsewhere. Stephen Barlow, the pianist, is appropriately discreet and restrained.

Delius settings are "modern" in the sense that they evoke the spirit of Jugendstil or the Art and Crafts  Movement. They are totally of their time. This CD also includes the even earlier and sparer Five Songs from the Norwegian RT V/5 and The Eleven Early Songs - Norwegian (RT V/2).

Delius's grounding in this pure aesthetic extends to his settings of English verse. Shakespeare's It was a lover and his lass has been set so many times that it's almost become a cliché for quaint folksiness. Nowadays, it would take guts to set "a hey and aho and a hey nonino". Similarly, it would be hard to avoid twee in "cuckoo, jug-jug, pu-wee, too wittawoo" as in the Thomas Nash setting. But Delius writing during the First World War would have had quite different connotations. Stone and Barlow deliver without affectation.

Delius doesn't have the melodic gift of  Ralph Vaughan Williams or Gerald Finzi''s affinity with Tudor and Stuart poets, but his approach is sincere - "Arts and Crafts"  honesty. Percy Bysshe Shelley's poetry, however, doesn't naturally lend itself to simplicity. Delius's Three Songs  RT V/12 (1891) to Shelley are more conventionally "Victorian".  In Love's Philosophy, Barlow shapes the elaborate piano part which lets Stone's voice emerge at the critical moment, "if thou kisst not me?".  These songs are more "polished", like sophisticated parlour songs, but Delius's earlier purity is more distinctively individual.
at July 22, 2011