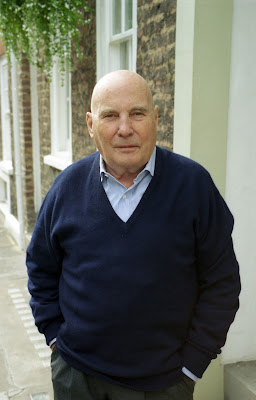 Hans Werner Henze turns 85 today. One of the great eminences of modern music, all the greater because he refused to compromise his principles to chase popular success. He's extremely prolific, and still working, and his music covers a wide range of styles and genres. Over 400 pieces and still continuing.

Until the debacle of 1968, he was opera's greatest hope, creating operas that were accessible but also good, innovative music. Yet success didn't blind him to the world outside privileged opera circles. He became a communist, went to live in Cuba with Castro, and set up a community in the Italian countryside. Red flags to the bull of the Right: Henze was banned from the US by the FBI (who were also tailing Benjamin Britten). Yet Henze wasn't accepted by the Left, either, as he wasn't radical enough and lived a champagne lifestyle at home.

Contradictions. Son of a brutish Nazi father he came out gay and liberal, long before it was "safe" to do so. His outlook is German but he was so p'd off by the Adenauer scene that he moved to Italy in the 1950's. He's uncompromisingly modern, but accessible and direct.  He scraps with composers like Lachenmann who can't fault Henze's experience and genuine musical instincts.

Henze's music is a microcosm of the last 60 years. Discovering modern music and jazz after growing up under the Nazis, he was open to all influences and found his own distinctive way. He used to hang out at Aldeburgh though by that stage his friendship with W H Auden didn't win him points with Britten. Some of the later work, such as Phaedra, is so deep and uncompromising that it won't be appreciated until Henze's role in modern music is properly understood. The media, and audiences who follow the media, don't know whatb they're missing. Please delve this site for lots more on Henze, and Phaedra in particular. If I ever get time I'll wrtite about some other Henze key works, like Seven Songs From the Arabian, and the 9th Symphony, even some of the music for film. Read Henze's biography, (the Wiki article is pretty infantile) but above all, listen to the music. Photo is by Hans Peter, courtesy Schott Music, on whose site you can hear sound samples.
at July 01, 2011