"Feel the width" Havergal Brian Gothic at the Proms 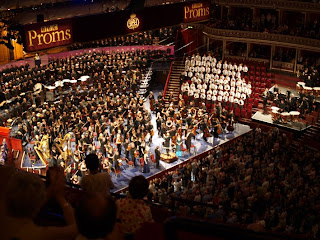 If ever there was a performance that could make Havergal Brian's Gothic Symphony work, Martyn Brabbins and the BBC Proms (Prom 4) pulled off the most amazing performance imaginable. This was total, extravagant theatre, an event to be remembered for decades to come. "And we were there!" someone said reverentially. "Pity about the music".

One third of the massive Royal Albert Hall was taken over by the sheer number of performers. Nine choirs, no less, visually stunning on their own, especially the ones in lavender gowns. Two main orchestras. Two timpani orchestras (not symphony orchestras). The choristers sitting beside them might be still deaf the next day. And of course, like a Colossus, the mighty Royal Albert Hall Willis organ with its 9997 pipes and 149 stops, the second biggest in the world, wonderfully spotlit.

Martyn Brabbins deserves a medal.  He's braved the dense jungle of this score like a fearless explorer mapping unknown terrirtory. As he journeys through this humungous traverse, he focuses on the many brief moments which give it interest, a flurry of harps, for example, like flowers blooming in forest clearings.  Better still, he brings out the way the symphony is built from multiple separate units rather like an intricate puzzle. Within the main orchestra there are various sub groups like the group of winds, but in no apparent relation to the whole. At first, the timpani orchestras play together, so there's an acoustic logic, but later one falls silent.  On paper, the ideas may look good, but they don't cohere in practical performance. The symphony feels like it's been constructed like an elaborate theoretical puzzle, the object of which is to fit in as many features as possible.

Brian's Gothic has been compared to Mahler's Eighth Symphony, on the basis that the latter was marketed as the "symphony of a thousand", but the comparison is nonsense. The label was a PR ruse. Mahler's focus was on spiritual meaning. Although Mahler's structure is unorthodox, there's a powerful trajectory that pulls it forward. Brian's symphony is perhaps called the Gothic because it's a construction, like a cathedral built by many people over different periods. But is it a cathedral built without purpose? For example, in the final movement, the Te ergo quaesumus, Alastair Miles intones lines that waver upwards and down, perhaps in homage to Orthodox plainchant, but the orchestra's playing a parody of jazz swing. Sometimes contrasts have reason, but in this symphony they seem to exist for variety's sake. The one truly sublime moment is when Susan Gritton sings Judex crederis esse venturus from way up in the rafters. Magnificent singing, magnificently theatrical. But the rest of the movement consists of that 4-word sentence alone, and it's quickly dispensed with in favour of meaningless extended vocalise.

Perhaps comparison with Stockhausen would be more telling. Martyn Brabbins was one of the three conductors who made sense of Gruppen at the Proms in 2008. Please read this link, which discusses the way Stockhausen used sonic space to create awesome wonder. Obviously Brian writing in the 1920's couldn't conceive of such concepts, but the effects he uses are theatrical, whether or not he was aware of thier impact in real performance.

This BBC Prom performance is a watershed in Havergal Brian reception, because it's the biggest exposure Brian has ever had.  He's always been known better by reputation than by actual experience, which adds to the cachet of exclusivity. Performances are rare, and the recordings are poor, some churned out by the equivalent of jobbing bands. Good performance is essential if any composer is to get the recognition he's due. Novelty status is not enough. John Foulds's Requiem bombed at its much-heralded performance in 2007, also at the Royal Albert Hall, thanks to lugubrious conducting (Leon Botstein). Last year, Foulds's music was heard again at the BBC Proms with far better results.

I enjoyed this performance a lot because it was such a theatrical experience. Brabbins and his musicians all deserve credit. But so, too, the logistic whizzes who made it possible at all. It must have been like moving an army. Brian's Gothic is a strange Leviathan, whose sheer enormity attracts interest. There always will be audiences that "don't mind the quality" as long as they can "feel the width".

Hopefully, Brabbins's Proms performance of Brian's Gothic will be recorded ,if only to recoup the enormous costs. It's a superlative way into the symphony particularly as so little of this music is available. Fortunately, the Havergal Brian Society website is so comprehensive that now everyone can become familiar with his work even if they haven't heard it.
A more detailed and formal review is here in Opera Today
at July 18, 2011

I can remember Robert Simpson's great Brian revival - it happened when I was a teenager. I suspect it's Brian's fate to be wheeled out every 30 or 40 years as the great neglected British composer, only to be wheeled back in again. Simpson's revival was deeply conservative - he was holding up Brian as an example of what he thought symphonic music ought to be.

I think it's understandable that the public will love and the critical establishment hate anyone with the "neglected genius" tag. I missed the Prom itself but I've listened to the symphony since. My initial response is that it's very "ear-catching" and engaging and I want to listen to it again.

It strikes me there are many reasons why composers are thought of as "good" or "bad". Alan Rawsthorne springs to mind. His symphonies were known when Brian's were not. I really like AR's violin sonata and 1st piano concerto, but his symphonies often strike me as truncated and leave me feeling underwhelmed, especially alongside Tippett's. In his lifetime, should Brian have been performed more alongside Tippett, Rawsthorne, Searle, Lutyens, Seiber, Rainier, Panufnik, et al? Was/is his music anymore meaningful than theirs?

Perhaps its as much to do with the way composers and their works engage with the world around them as it is to do with purely "musical" analysis: Rawsthorne's film music tapped into the zeitgeist. Tippett wrote A Child of Our Time (and viewed his whole life as a musician as one necessitating engagement). Britten reinvigorated opera and wrote the War Requiem. Had Brian managed to "engage" in some way, then I suspect he would have been better known during his life. We would know by now if we still wanted to listen to what he wrote.