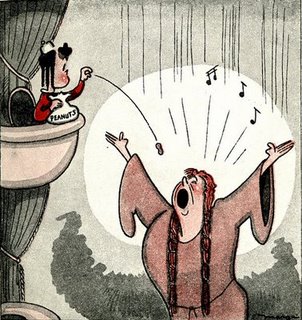 Delightful article by Gerard McBurney on how he discovered Wagner when he was a kid - despite parental opposition  Read it here. We all come to things in our own ways. I grew up with Verdi because that's what my father loved. He was put off by Mahler because when he was an undergraduate, Mahler was admired by pretentious fellow students "posing in smoking jackets".

My first experience of Wagner was when I was about 6. A family friend used to play LPs and make me listen and think what the music was trying to say. It's still a good exercise in listening because usually we're taught what to listen to, not how to listen for ourselves. I remember the wildness and the churning movement, people singing in a foreign language. Then he showed me the picture - white people rioting! I was deeply shocked. Only years later did I realize it was a scene from Meistersinger.  So I don't think you can ever introduce kids too young, and you don't need to dumb down. If they're willing, they'll find a way.
at July 19, 2011

Email ThisBlogThis!Share to TwitterShare to FacebookShare to Pinterest
Labels: music for kids

I actually followed the link on this one and read the full article. I love that he finds what the music means to him personally instead of approaching it from an academic angle.
Thanks for posting :)