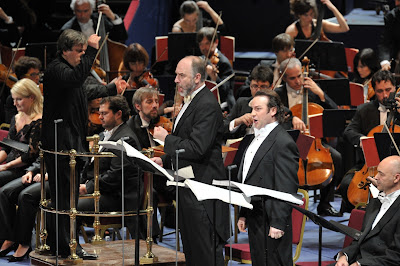 Heard in its (almost) entirety at BBC Prom 2, Rossini's William Tell is a rousing experience. So rousing that you want to rush out singing Liberté, liberté. Thrilling ! Catch it online for seven days. A new CD too, but there's nothing quite like the buzz of live performance.

William Tell is an icon because he was an ordinary rustic who stirred things up and beat off the Austrians. To this day, the Swiss do things their own way. Perhaps geography helps. You can't easily invade the Alps or subdue a peasantry that knows the mountains. For Schiller, Wilhelm Tell  showed how ordinary people could resist tyrants. For Rossini, too, perhaps.

But what I enjoyed most about this performance wasn't revolutionary fire, but the sense of nature and wide open spaces. Antonio Pappano conducts with expansive brio, bright dynamics and sparkling tempi.  Better this spontaneity than too much studied detail, because Rossini is painting landscape into his music. Panoramic vistas, winds, storms on lakes, impenetrable forests and, again and again, the image of the sky. For the Romantic Age, Nature embodied freedom. William Tell and his peers were "pure" because they lived in tune with simple things.  Rossini's French audiences would automatically connect William Tell with the ideas of Jean-Jacques Rousseau.

Hence the extravagant scenes, which would test Hollywood. Tell and Melchtal escape across a lake and the wind blows up. Peasants gather from miles around: Gessler's surrounded by an army. Milling crowds, battle scenes, and chorus after chorus, augmented by extended dance sequences. The logistics are as hard to comprehend as rhe idea that a man can shoot an apple off his son's head. Yet Rossini writes Guillaume Tell so descriptively that your imagination supplies the visuals. Film would be far too limiting. What makes Guillaume Tell so lively is the sheer variety in the music, as if Rossini's building in multi-screen effects.

Pappano's "other" job besides the Royal Opera House has long been conducting the Academy of Santa Cecilia in Rome.  In 2007, they did a brilliant Rossini Stabat Mater. They are very different from a coventional opera house orchestra, but Pappano seems to inspire them with his enthusiasm.  This orchestra was having fun.

The singing was even more impressive. John Osborn's Arnold is wonderful. It's a bigger, trickier part than William Tell in many ways, because Rossini places so much importance on the relationship between Arnold and Princess Mathilde (Malyn Byström) which aren't the same in Schiller and history. Again, Rossini's French audiences would have thought of Paul et Virginie. The two parts are lyrical, but the part of Arnold is uncommonly demanding, stretching the tenor to the top of his range for uncomfortably long periods. John Osborn has the stamina, and makes the maddening tessitura seem natural and unforced. The rapport between Osborn and Byström in Act Two was exqusite.

Arnold's an ultra-high tenor, while William Tell himself is a baritone verging on bass. This emphasizes Tell's earthy gruffness : he's a man of relatively few words, but when he does sing he gets to the point.  He shoots straight ! Notice how the music goes eerily silent when Tell takes aim.  Michele Pertusi's firm authority creates the part well.  Rossini also pointedly creates the Tell family as a distinct unit, balancing the baritone Tell with high soprano Jemmy and rich mezzo Hedwige (Elena Xanthoudakis and Patricia Bardon). Family values - natural values.

Rossini writes many different choruses into Guillaume Tell, each very individual. This poses problems with staging because the singers can't change costumes, but is integral to the idea of the opera as panoramic vision of nature in its diversity. The men of Unterwald are not like the men of Uri, but they all come down from their distant cantons to join in a common cause. The chorus of the Academy of Santa Cecilia, Rome sing with such character that it's quite striking hiow they turn each chorus intoi a "role".

Following the performance with the BBC programme text obscures the fact that some passages have been omitted and amended, which is not unusual in an opera of this size. The Act Two trio between Arnold, Tell and Walther (Matthew Rose) is intact, but the Act Four trio between Mathilde, Hedwige and Jemmy is gone. That's odd because it draws the narrative together. If you follow the performance with a full libretto, you get thrown off course from time to time, but presumably the cuts are made for a reason. In any case, I'd rather an exuberant performance like this  than something too pedantic. Better to focus on freedom !.

Photo : Michele Pertusi (William Tell) and John Osborn (Arnold Melchthal) perform at the BBC Proms on Saturday 16 July, in a concert performance of Rossini's William Tell, with the Orchestra and Chorus of the Academy of Santa Cecilia conducted by Antonio Pappano. Copyright: BBC/Chris Christodoulou
at July 17, 2011