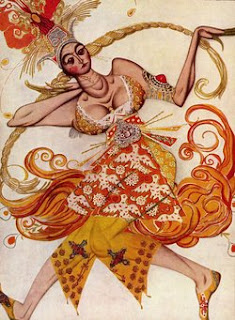 While waiting in the car for Prom 16, a young parking inspector came up for a chat. "Are you going to classical music?", he asked brightly. "Someone in the line (for arena seats) said it cost only £5!" Now there's a man who's going to do his first Prom soon. "I'll bring a newspaper", he said, "to sit on" (which is probably a good use for what the print media has become, thanks in part to NI).

Proms audiences are fascinating. Genuine music lovers and anoraks and people who have no idea at all, except that the Proms are An Event. A few years ago I sat with a couple who were totally overwhelmed.  "Is that a timpani orchestra?" said one. "No, dear, it's a SYMPHONY orchestra". "What is this place?" "The Royal Albert Hall". "Who is Royal Albert?". Much consternation. "I had an uncle called Albert." And more. As my friend said "No one could make that up".

But I loved that pair, they were so genuine and so direct. Much, much nicer than some of the self promoting pseuds around. And guess what they were listening to? Birtwistle, which they approached completely without prejudice. And quite enjoyed..

The audience at this Prom seemed mostly new to music, too. "I heard of Firebird" said a woman near me."It was on the radio once." Which proves that the BBC is fulfilling its remit. Hearing it live must have been more fun than she could have imagined. Complete with trumpets in the upper gallery! So I did feel churlish, being so bored witless by this performance by Thierry Fischer conducting BBC NOW (National Orchestra of Wales, not as in "now", up-to-the minute). It's a good orchestra but what are they doing polishing the life out of this music? Stravinsky was writing for ballet, and ballet is physical. Fischer stretches the tempi, killing the dynamic pulse. A dancer would have to hold position so long that they'd lose their natural rhythm. You can only pose en pointe for a moment, or you collapse. The bassoonist entered twice with brio because she knows what her part symbolizes. Fischer pats her down to cool it. Later he tries to rouse the violins with vigorous hand movements, but too little, too late. Maybe Fischer wanted to bring out the range of colour in the music, which might work Haitink-style in a symphony. But ballet is different.

Last time we heard Firebird at the BBC Proms, it was part of the year they did all the Stravinsky ballets. That was an education, because it showed how writing for dance is as much a specialism as writing for voice. Gergiev, being a Mariinsky man, conducted with lethal fire. Dancers would be on their toes, literally, but if they were any good (as they probably are in Russia) they'd rise to the challenge. In 2008, Jurowski and LPO  did the Firebird more orchestrally but with similar verve. You can take the music out of the ballet theatre but you can't take the ballet out of the music.

Nonetheless, the audience loved Fischer's Firebird, which is what matters. Maybe the lady who heard  it on the radio will go on to listen again and hear more. But she'll never forget the thrill of hearing it live for the first time, and in the surroundings of the Royal Albert Hall. Berlioz's Overture Le Corsaire and Fauré's Pavane can be ravishing, but in the Proms ambiance, even Fischer's foursquare approach had an impact.

Much more interesting was Pascal Dusapin's String Quartet No. 6, 'Hinterland' ('Hapax' for string quartet and orchestra (2008-9)  commissioned by the Arditti Quartet who have championed so much of Dusapin's work. It's not quite a concerto for string quartet and orchestra because the primary focus is the quartet, the orchestra extending and expanding what they do. The four main protagonists converse, the orchestra behind them murmuring, clucking, chattering in response. Lots of wood in the orchestral strings, rhythmic affirmations and interjections. No percussion needed, the strings do the work. Two horns, two harps. The action here flows between soloists, quartet and orchestra, the whole a dizzying pattern of ever-changing interconnections.

Dusapin has often spoken about his interest in Samuel Beckett, so one way into this piece is to think of the individual members of the Arditti Quartet as voices, conferring. In real conversation, we express a lot through gesture and monosylllabic responses that express more than they seem on the surface. Dusapin's String Quartet no 6 was fascinating for me as a study in communication. In real life people interact through non-verbal clues, ums, ahs and nods, which all are part of the process of meaning. Real people don't declaim in flowery stylization. Thus the intricate maze of fragmentary sound and counter-sound, operating on several different levels at once. Nothing random in this dense web, every note purposefully placed.  I have no idea what Dusapin means by "hinterland" but for me, the idea emerges of the "hinterland" behind the foreground of conversation, the subconcious interactions that really make communication, much more than simply speech.

A lot of new music is more approachable than you'd expect coming from conventional expectations oif what music "should" be. The development in Dusapin's Quartet no 6 is in the ebb and flow, rather than structural. There's no obvious resolution because in real life, communication never ends.  No doubt a lot of this audience froze at the very thought of "new" music but I was surprised how warmly some seemed to respond, whether or not they were thinking analytically.  Listen again online, for 7 days and get more from the experience. (There's also a programme where Dusapin talks about his work. Like most composers, he expresses himself better in music)
at July 28, 2011

Perhaps NOW and Stravinsky aren't meant for one another: I used to have a recording of the orchestra under David Atherton in 'The Rite of Spring,' and it was the most tiresome, ponderous and lethargic performance I'd ever heard. I didn't have the CD that long, needless to say...

Dare I say it but a good deal of what I've heard from Fischer/BBC NOW has been disappointing, even Messiaen, whom Fischer venerates. Sometimes the fit doesn't fit. Like Chailly ay Concertgebouw and Chailly Leipzig - complete transformation.