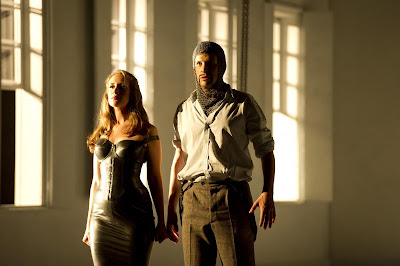 When Glyndebourne's Handel Rinaldo reaches the Proms on 25th August (live, and broadcast online) make sure you listen, because some of the singing will be very good.  Same principals, different conductor (Lawrence Cummings) and of course, minimal staging.  Hopefully, they'll retain some of the better bits in the production, like the flying bicycles, and drop the kinky boarding school pretence.

Baroque is fun because it's surreal. No-one in their right mind could insist on authentic realism in Rinaldo, simply because it's set in the Crusades. A plot with sorcerers who can whip people over skies and seas? Handel and his audiences had no illusions about being literal. So there's no problem at all with the idea of knights on bicycles, because that's integral to the story. Against Armida's magic, the Crusader's macho bluff is revealed as hollow. Rinaldo gets saved because he's loved.  In fact, you could say the whole idea behind the real Crusades was fantasy. Europeans have long been fascinated by "Eastern Promise" because it offers an alien exoticism they can't get in real life.

So why schoolboys/schoolgirls in the Glyndebourne Rinaldo?  The bad news is that it demeans the story as teenage wet dream. But the good news is that it enhances Sonia Prina's Rinaldo. Prina is a very experienced Handel singer and has worked with director Robert Carsen before, so it's quite feasible that the production was designed round her. There can be little explanation for the recent Meistersinger updating other than to enhance Gerald Finley's Sachs as poet, not cobbler. It's essential that the main role looks and sounds right, so as a choice it has merit. Prina is attractive in a short, compact schoolboy way - think Justin Beiber. She's energetic and earthy, so the production plays to her strengths. If you want an ethereal countertenor, you have to conceive the role in a completely different way.

Originally, Sandrine Piau was cast as Armida, which also makes sense in relation to Sonia Prina, because Piau's so elegant and refined the contrast would be hilarious. For whatever reason, Piau pulled out, and Brenda Rae stepped in. Rae is excellent in this context, because she moves well in 6 inch heels and wiggles her body salaciously, which is aboslutely right for Armida as sex queen (which is implicit in Handel!). The voice has an edge, but again that works with the role.

Best singing from Luca Pisaroni, who is singing the role again, in a different production, in Chicago in a few months. Argante is the King of Jerusalem, a warlord who's quite capable of holding the Crusaders at bay. His weak spot is that he fancies Armida who is by no means a nice Muslim girl, even by the standards of the 11th century. Argante is by no means cardboard villain, as Pisaroni shows, glorying in roccoco flourishes of his entry aria so it shines with colour and complexity. You can "hear" the baroque gold and burnished curlicues in this voice! Fortunately, Handel develops the role, so we get to hear Pisaroni build the other sides of Argante's character. This is important because the ending defies logic unless you think of Argante as a real person. He and Armida make up even though both are seriously strong personalities.

If this Glyndebourne Handel Rinaldo becomes available on DVD or in cinemas, it is definitely worth catching. Perhaps the film direction will moderate the staging, and emphasize the music. Wonderful countertenors, William Towers and Tim Mead. Please read my full review of the live performance at Glyndebourne HERE in Opera Today. More photos, too. Photo above of Brenda Rae and Luca Pisaroni, Alastair Miles, courtesy Glyndebourne Festival Opera.
at July 14, 2011