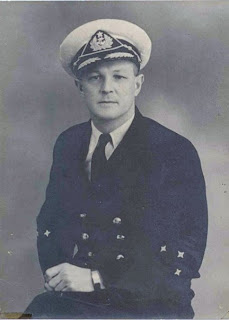 "Yumpin' yiminey!" Thorbjørn used to say, never losing his heavy accent. His father was a harbour official at Christiania. One of his numerous siblings fell off the dock and drowned, aged 5. In her old age, his mother lived in a mountain hut near Lillehammer, "like Heidi". Thorbjørn and two of his other brothers went to sea and travelled all over the world.  Aged 17, he got shipwrecked off the coast of western Australia and lived with the aboriginals. Later, he wrote a book about it. One day he just happened to be walking down a street in New York, and what should happen, but all three brothers met up on the same street corner, though they didn't even know they were on the same continent. To mark the occasion they had a photograph taken at the nearest studio, as people did then. The brother who worked on JP Morgan's yacht stayed in America. Next brother settled in Fuzhou, China, where he had a large brood of kids, but then the Japanese came and then the Communists. Thorbjørn worked all over China, grew strawberries in Shanghai (quite  a feat),  played tennis, and was a fantastic draftsman, who did hundreds of pen and ink drawings of ships. He was close to his Parsee brother-in-law and his Cantonese PA whom I called "Chan Pak" (Grandfather Chan). He spent 2 1/2 years in a Japanese prison camp. Although Norwegians were officially Quisling, individually they gave grief to the Japanese. Badly weakened, he died soon after. I never knew him.

Now Thorbjørn is in a crowded burial ground, so higgeldy piggeldy that you have to step on dozens of others to get to his grave. No-one can ever find it. But I always locate it right away as if by radar, lord knows how..
at July 23, 2011

Email ThisBlogThis!Share to TwitterShare to FacebookShare to Pinterest
Labels: Norway

My father was also a prisoner of war of the Japanese. He spent time in Changi and worked on the railway. He was also an artist and I have some drawings and paintings he did then.

Although he was dying at the end of the war and owed his life, perhaps, to the dropping of the atomic bombs, he always maintained that they should never have been dropped.

Hi Dominic, what a good man yoiur Dad must have been. My uncles were in Sendai near where the tsunami - the3 rest were dead or refufgess. Some killed in war crimes etc. They were all fed the line that they were saved by the bomb, because that was the heavily publicized explanation. But some of them thought, why kill women and children for us ? I remember some of them feeling guilt because of it. Nowadays we know it was geopolitics, US versus the USSR. So in a waybthe POWs suffered twice.