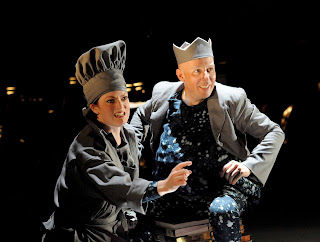 As promised here is a link to my full, formal review of Luke Bedford's Seven Angels which premiered in Birmingham and reached London on 12th July. I hope this opera will be heard again, in concert form and revived, because it is a lot deeper than most reports might suggest. It's not an "easy" work as it's deliberately ambiguous. Because the climactic scene is the Conference, where authority figures shout platitudes, it's easy to think that that's what the opera is about. But since when did politicians shouting slogans mean what they say ? So beware ! As in life, you can follow slogans or you can think.
photo credit : Alastair Muir
at July 15, 2011