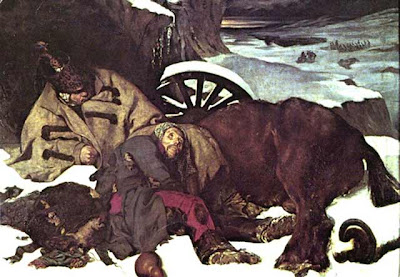 Three contrasting versions of Robert Schumann's Die beiden Grenadiere (op 48/1 !840), showing how vocal styles evolve. The first was made in 1905 by a bass baritone called Carl Reich , Notice the formality, even allowing for the poor sound quality, and the fact that singers were under pressure in an era where singing into a machine was against all their instincts.  Moreover they had to fir their performance to the time allowed by the technical equipment. It didn't make for naturalism.

The second recording is Alexander Kipnis, made in 1939. His timbre is so low that he isn't really flexible, so he varies tempi for dramatic effect. You can tell he sang more opera than Lieder. The Marseillaise runs a tad too high for him but he tackles it manfully, decreasing volume so when it builds up it feels higher than it is. "So will ich liegen und horchen still, Wie eine Schildwach, im Grabe". It suggests pain, and the stumbling footsteps of men marching back from Russia, who may never reach home.

The last recording is Bryn Terfel made in 2000, and is released by the copyright holder Liceu Opera Barcelona.  Thirteen years ago, he still had non-native German, but every word is clear and expressed with proper meaning. You can hear the personalities of the two soldiers. Terfel shapes the turbulent undercurrents in the lines "Das Ehrenkreuz am roten Band, Sollst du aufs Herz mir legen", suggesting demented march rhythms. Perhaps the soldier is maddened by suffering, and by delusion. "Dann steig ich gewaffnet hervor aus dem Grab - Den Kaiser, den Kaiser zu schützen!" Terfel's voice then drops to a haunted, trembling whisper.  Terfel's a bass baritone, not a baritone. but he has exceptional agility and brightness. Compare him with Kipnis, who growls like a true Russian bass. Terfel's also got the technique to keep flexible for many years yet.