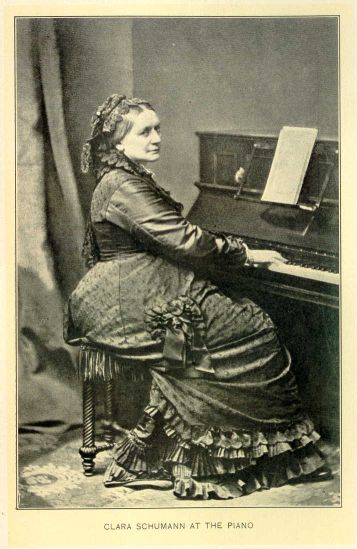 Today is Clara Schumann's 200th birthday. She may not be getting the publicity birthday boys like Wagner and Verdi are getting, or even the coverage given to mere striplings like Benjamin Britten (aged 99 and 10/12ths). But with all the fuss about the "first woman conductor at the BBC Proms", it is Clara whom we should honour.

Clara is a genuine icon in many ways. We will never know what she sounded like as pianist but she was one of the first mega-celebrity pianists, who filled houses all over Europe. Audiences who had heard Chopin and Lizst live loved her playing, which suggests that she was good, whatever her gender. And Brahms, who played well and had a good ear, loved her dearly. We may never know what she sounded like but if she'd had the support of recording companies, etc. she might be better known than she is. (In those days performers had to manage themselves without any system to back them up.)

She grew up in a strange, strained atmosphere. Her father denied her any contact with her mother or indeed with anyone he could not control. To marry Robert Schumann, she had to take her father to court in a case which shocked those who knew of it. That alone would make her someone to admire. Breaking out of an abusive situation is tough if that's all you've ever known, even now, but she had to face a patriarchal society much more rigid than we know And, she was nice to her Dad when he was old.

Clara lived to perform. She loved Robert dearly, but would rush back on tour as soon as her pregnancies ended. She wasn't the first female celebrity pianist even if we exclude Fanny Mendelssohn whose position placed her "above" society. But she was an artist with an independent career. People listened because she was good, not because she was a novelty. Robert wanted her to write music. She obliged him, but her real passion was playing. Every few years, there are attempts to promote her piano songs. Her greatest champion is Wolfgang Holzmair, whose 2002 recording of Clara's songs with Imogen Cooper is the best in the field. No comparison, although the songs are heard quite often. Holzmair's soft-grained voice suits them well, and he sings with sincerity, so the songs work, just about. The problem is that her heart wasn't in writing, but in performance. So when we honour Clara Schumann, we should honour her as a true pioneer, who achieved what she did without tokenism and media hype. Strange how those who make a fuss about "the first woman conductor" don't seem to have noticed Clara Schumann.So much for true feminism, which still has a long way to go.
at September 13, 2013