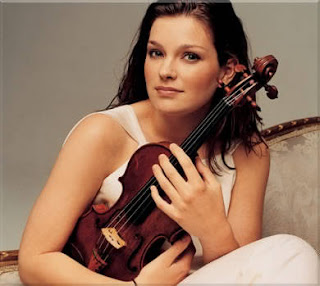 In Prom 67, Paavo Järvi and the Orchestre de Paris played Arvo Pärt, Britten, Berlioz and Saint-Saëns. But this Prom will be remembered for Janine Jansen's Britten Violin Concerto op 15, 1939. Jansen's 2009 recording (also with Paavo Järvi) is classic, but this Proms performance was even more impassioned.

Jansen played the long opening lines serenely, intensifying the contrast between beauty and the tense agitato. Fiercely angular bowing. Wild, turbulent strings begin the second movement, suggesting flight and action .The long diminuendo could suggest many things, Jansen's delicacy makes it feel vulnerable, particularly fragile against the turbulence in the orchestra. The violin emerges, in an intriguing solo cadenza: Jansen beats pizzicato. Hollow, wooden percussiveness, basic sounds yet in this context, frighteningly eerie.  Then the violin soars, bringing the whole orchestra behind it in a rising anthem. Yet, if there is a protagonist in the piece, he or she is very much alone. In the quiet passages, Jansen is firm and resolute. Turbulent, circular figures in the orchestra threaten to overwhelm but Jansen's response is fast paced and agile. The Orchestre de Paris has a richer sound than the LSO on the recording, and for Järvi they create the brooding final movement with depth, the dark chords like heartbeats or a march towards death. The violin twists, creating strange ambiguities. Jansen's playing is assured but she gets to the emotionally disturbing soul of the piece.  Britten wrote the piece at a time of turmoil, when his despair over Europe was so acute he needed to get way. Listening to the Violin Concerto, perhaps we can already hear Britten confronting the fundamental darkness of the human spirit, from which there is no escape.

Pairing Britten's Violin Concerto with Arvo Pärt's Cantus in memoriam Benjamin Britten, was astute. When Edward Gardner and the BBCSO played this Pärt piece in 2010, its tolling bell and wash of strings sounded like a reprise of Britten's Sea Interludes. Perhaps Pärt was thinking of Peter Grimes, but hearing the piece in the broader context of Britten's life and death made the work seem altogther more substantial, and more moving. The Orchestre de Paris has a refinement that few British orchestras - even the best - don't often achieve. In this performance, they gave Pärt's short piece the power of elegy.

After Britten, we needed Something Completely Different. so Järvi blew the gloom away with a vigorous Berlioz Le Corsaire. Vivid, energetic playing with exactly the right touch of bravado. The Orchestre de Paris are far too stylish to go for the vulgarity that Berlioz sometimes needs. but here they captured the wild spirit of open skies and seas. We could imagine pirates and dancers throwing caution to the winds.

Thierry Eisach played the Royal Albert Hall organ in Saint-Saëns.Symphony no 3. This might have been written for a cathedral and a very academic, austere organist but it's an interior "open horizon" of the imagination. Imagine Saint-Saëns as a swashbuckling pirate in his dreams, and you'll get an idea what Eisach, Järvi and the Orchestre de Paris achieved in this thrilling Prom, the first truly satisfying Prom this week.
at September 02, 2013