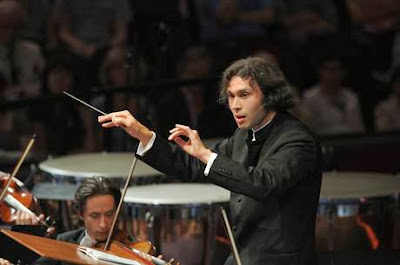 Vladimir Jurowski conducted a fascinating Britten Peter Grimes with the London Philharmonic Orchestra at the Royal Festival Hall. Fascinating, because Jurowski  finds things in Britten other conductors don't get in the first place. Jurowski approaches Britten as a composer,  without the usual baggage of Britishness and Brittenish. Jurowski makes us hear Britten as a composer who knew the music of his era and  had much to say about the times he lived in. Britten was not provincial though he chose to live in Aldeburgh. Peter Grimes is by no means a "heritage museum" in music even if its inspiration was an 18th century text.

Jurowski's Passacaglia and Sea Interludes reveal Britten  as a composer in the wider European context: grand, majestic gestures, as Romantic in the best sense of the word, but emotionally intense with a very modern edge. Peter Grimes was Britten's first mature opera and arguably the first real British opera, so it's important to hear it in this context. Britten knew the music of his time. The orchestration is huge in comparison to Britten's later works. There are even references to American popular music, such as in the Act Three scene in the pub. Britten, who knew more about America than most Suffolk fisherfolk, was obliquely commenting on social change. For change is at the heart of Peter Grimes.

Grimes is persecuted by pious hypocrites, determined to condemn him on principle. All around Aldeburgh, there are ruined churches, destroyed by fanatics in the Reformation. Witch hunts weren't so far in the past. Whatever Grimes may or may not have done, there are those in the Borough  who need  an outlet for the poison in their own souls. Perhaps there are subtexts in this opera linked to Britten's sexuality, or to his relationship with the conservative music establishment (qv Gloriana here) but Peter Grimes is an opera which protests blind obedience to conformity. Anniversary years like this smother genuine knowledge under a fire blanket of banal cliché. All the more reason to respect Jurowski, even though the concert was part of the South Bank's anodyne, dementedly superficial The Rest Is Noise marketing.

Stuart Skelton's Peter Grimes is a breath of fresh air. Because Grimes is inarticulate, it doesn't mean that the role should be sung with neutral colour. The clarity of Skelton's timbre  suggests Grimes's intelligence. Like his apprentices, he might have been forced into his line of work without choice. Skelton sang "Now the Great Bear and Pleaides" with such elegant purity that I thought of Captain Vere, the real hero of Billy Budd. Strength, for Britten, isn't physical prowess so much as emotional integrity. Audiences might like their Britten characters safer and more comfortable, but Skelton shows where the real potential in the role might lie.

Some excellent support from Brindley Sherratt (Swallow), whose shimmy with the Nieces ((Malin Christensson and Elizabeth Cragg) was low down and dirty yet hilarious at the same time. Nice to hear levity in a bass. Alan Opie was a good Balstrode and Mark Stone a very convincing Ned Keene. If that leather jacket cost thousands, it gave him an authentic swagger. The main female roles, Ellen Orford (Pamela Armstong), Auntie (Pamela Helen Stephen), and Mrs Sedley (Jean Rigby) could have been done with more bite, but to some extent, Britten wasn't at his best creating women. Mrs Sedley, though, can benefit from being done malevolently. There's vicious camp humour in "Murder most horrid", where trombones slither like snakes. If nothing else in this anniversary year, we should learn to recognize Britten's incisive sense of humour.

Singers have to show character and interact even in semi-stagings  and concert performances. If anything, good Personenregie is even more important in semi-stagings and concert performances. One of the reasons I like minimal productions is that they focus attention on the performers themselves, not on the decor. The director was Daniel Salter who directed an excellent Die Entführung aus dem Serail at Garsington Opera at Wormsley. (review here) . Alex Doidge-Green's designs were excellent. The LPO were roped in, partly to shield them from the movement of the singers on a cramped stage, but also symbolically. When Skelton rolled up the rope, he released the Peter Grimes, heading towards fate.
at September 29, 2013