Tragedy on the Hill of the Waiting Wife 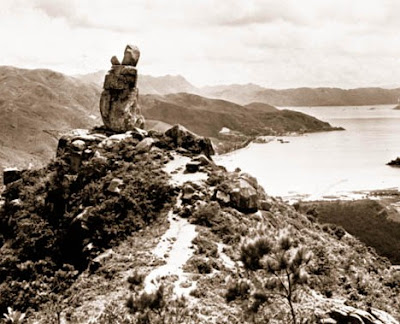 In Hong Kong, there's a natural rock formation on the pinnacle of a hill, overlooking the sea. It's Mong Fu Shek, Looking Out for Husband Rock or "Amah" Rock 望夫石). The legend is that a woman climbed the hill every day with her baby on her back, waiting for her husband who had gone away. He never returned, because he was dead and she didn't know. So she was turned to stone, a monument to faithful love. The film Tragedy on the Hill of the Waiting Wife (魂斷望夫山 1955)  is a faithful monument, too, because it captures a world which is now gone.

The movie starts with a dramatic shot of the rock on the hill, and pans out onto the rural countryside around it, where farmers still ploughed barefoot in rice fields behind buffaloes, and villages were surrounded by threshing terraces.  The outdoor scenes were filmed on location, so the scenery and houses are authentic. The indoor scenes were made in a studio but depict details like the actress waving a pandanus fan to chase away mosquitoes before she draws the curtain and goes to bed. The actress quotes a proverb about oil lamps and good luck, which I don't get because I don't know how oil lamps worked. In 1955, these things were living memory, so the film is a lovingly detailed glimpse into the past.

Pak Yin (白燕 1920-87) and Cheung Wood-yau (張活游 1910-85) play the lovers. They're blissfully happy but behind them the Rock looms. Two butterflies flutter past, an allusion to the Tang story of the Butterfly Lovers. In the ancient classic, a girl who wants to become a scholar has to disguise herself as a man in order to go to school in a distant town. She falls in love with a fellow student but eventually has to return home to reality. Her lover dies. She gets married, but as the procession passes the lover's tomb, she dies, and the lovers are at last united in death.

In the film, Pak Yin plays an educated girl who falls in love with a humble peasant. How and why, we don't know. It's enough that we see the traditional village wedding where she's carried over the threshold by an old woman. Although she's a city girl, Pak Yin's character is determined to embrace her new life, and accompanies her husband to the fields, much to his amazed delight. So she's seen working in the brackish water of a rice paddy, her trousers rolled up to her knees. Leeches attach to her bare legs. It's probably not planned but Pak Yin, the most glamorous movie star of her time, bursts out laughing. Paddy fields were like that, not at all romanticized. People grew fish in them to eat the bugs, and caught diseases from cuts and  blood infections. Then, when Cheung Wood-yau has to run in front of the camera, a village dog jumps in on the act and chases him. The director left that in, too. This film is true verité.

Pak Yin starts a school for the children of the village. She teaches them basic science: germs and practical hygiene. She tells them about cholera, and throws up in front of the class, who run out, crying "teacher has cholera". But she's pregnant. It's morning sickness. One day, her husband goes to collect firewood from the hillside. He has a strange premonition. "If I died what would you do?" he asks. She says she'd die rather than live without him. She goes into labour, while he's up the hill collecting firewood. He slips on the steep slope by the Rock and is killed.

Because her mother-in-law heard what the lovers said about suicide, she's terrified what the news might mean. The family concoct a story about the husband being called to work far away with a man who'd left the village years before. They have to forge letters, copying his handwriting, so Pak Yin thinks he's still alive. The Old Lady has to mourn in secret, giving away the roast meats she uses as offerings when she prays, so the young woman won't find out. 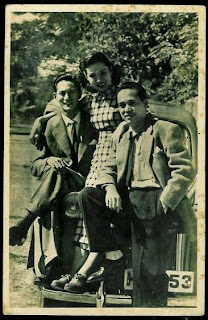 A drought  ruins the crops. Travelling necromancers come to the village, banging drums and chanting spells. Pak Yin won't have anything to do with superstition. She tells the villagers to dig an irrigation channel. "When we group together, we can achieve things" Wonderful scene where the villagers use their hoes and sing as they dig. Right from its inception around 1909, Chinese cinema was associated with modernization and progressive change. Movies could reach ordinary people more effectively than books. Pak Yin herself, though a glamour queen, often depicted strong women who stood up to the inequities of the feudal system.  Like the heroine of Butterfly Lovers who a thousand years before set out to study, Pak Yin's character in this movie teaches the village children. She's the breadwinner who runs a school and farm. It's significant, perhaps, that her child is a girl. The photo shows Pak Yin, together with two other megastars, Cheung Wood-yau and Cheung Ying, in real life, posing with a fancy car. You could read a feminist message into this movie, and a lot oif movies atbthe time did have an explicit feminist, modernist ethos, Pak Yin movies in particular.  The mother-in-law wants to protect the daugher-in-law, and the Pak Yin charcter resembles filial women throughout Chinese history, who are commemorated in "widow's arches" and the like.

One day, the man who the family claim the husband works for appears in the village. Pak Yin starts to realize that something's wrong, She looks up at Mong Fu Shek. It dawns on her that she, too, might be a widow deceived into waiting for a man who will never return. She falls sick with fever but hears the family worrying that she'll find the truth if she climbs up to the Rock, where her husband is buried. Delirious with grief, she runs out into the stormy night and collapses at the summit by the Rock, falling onto the stone that marks his grave. At last the lovers are reunited, in spirit.
at September 11, 2013

I miss those days of great actors and actresses who light up the screen whenever they appear including 白燕，嘉玲，林凤，林翠，林黛 etc but sadly they have almost all gone. It is the same story with greater than life opera singers including Caballe, Baltsa, Kabaivanska, Aragall etc. They shook up the stage whenever they appeared! Please keep us this blog, it is so unique to find one devoted to the Western and Cantonese arts!

there must be more of us who are bilingual in Chinese and western culture.