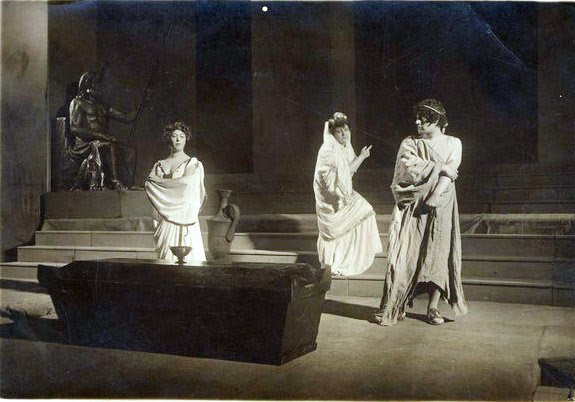 “Opera directing is very different to theatre directing,” Charles Edwards, director of Elektra at the Royal Opera House, told me in 2008.  “It has to be the music that motivates you.” In this second revival, Andris Nelsons is conducting, which alone almost guarantees an absorbing musical experience. Chrsitine Goerke sings Elektra, with Adrianne Pieczoka as Chrysothemis and Michaela Schuster as Klytemnestra. Rehearsal reports suggest that this will be stunning on all counts. HERE IS MY REVIEW.

“Elektra is a kind of Holy Stück,” Edwards told me. Sir Thomas Beecham conducted it at the Royal Opera House in 1910, a year after it was written, so it carries a venerable performance tradition. But every production is different. “It’s an opera with a fantastic inner logic to it, like Wozzeck, in terms of orchestral and psychological insight…. a kind of psychogram, drawing a picture of what’s happening in the minds of the characters." Citing the sequence where Klytemnestra recounts her traumatic dream, Edwards notes how close Strauss comes to atonality. The music wavers between tones because Klytemnestra can’t find her place emotionally. Strauss was writing well before Schoenberg, and conceptually this is very advanced. It’s as if the composer was on a “cliff edge, looking over into an abyss and pulling back”. Although there are elements of later Strauss in this music, the composer is on dangerous new ground.

Elektra also stands on the precipice in historical terms. This was the Vienna of Freud and artistic innovation. “Hofmannsthal’s libretto isn’t Wagnerian, it’s highly colloquial language, it was daring, yet he didn’t undertake lightly the task of reinterpreting the ancient tragedy in modern, psychological terms.” This was a pivot point in European history: nations tottering on the edge of the First World War, and the end of the Austro-Hungarian, German and Russian empires. Hence costumes which evoke Kaiser and Tsar, and sets which juxtapose ancient Greek ruins and early Bauhaus architecture. “The whole weight of history is pressing down.” It’s significant that the production was first conceived on the brink of the invasion of Iraq. If anything, the five years since the premiere in 2003,  have sharpened the focus. “We cannot ignore the past.” Had Parliament not had the guts to reject the bombing of Syria, we might be at war yet again, today. This Elektra is frighteningly prescient.

Klytemnestra wants to forget Agamemnon’s murder, but the truth catches up on her. The characters are locked in a cycle of retribution and violence. “Revenge, revenge, revenge,” said Edwards, “it’s been going on since the beginning of mankind.”

“Ich trage die Last des Glückes”, Elektra carries the burden of the past, until she herself dies. Her final dance is not a dance of triumph – she doesn’t die in other versions of the legend, but in Hofmannsthal’s version, she is killed, just like those who killed her father, because she wanted vengeance too much. “That’s what that final C Major chord means,” said Edwards. "It comes suddenly, in contrast to the minor keys that lead up to this point. Strauss is turning a blinding light upon us, This is not celebration, it’s interrogation : Is this what we really want ?” Elektra has been rehearsing her victory for a long time, but when it becomes reality, it finishes her off.

In this production, Edwards wants the music to come through clearly. “This won’t be a total Schlacht of sound, a generalized bloodbath of noise where you can’t really hear the words. The louder the orchestra, the more the singers have to force their voices and that lessens what they can really do.” Of course Elektra can be loud, but this can obscure the deeper levels of meaning. No diva “bathing in vast amounts of decibels”, then?  Edwards wanted to avoid the caricature of Elektra as a mad harpie. "A lot of her music is soft, amazingly tender. The dynamic between Elektra and Chrysothemis is fundamental. Elektra, for all her righteousness, is deeply damaged : everything that's weiblich, human and fertile about her, she’s had to repress, yet she doesn’t hold it against her sister who stands for all she can never have.”

The photo above is a still of a 1913 production of Hugo von Hofmannsthal's original (1903) play.  Notice how un-romantic it is, and how modern! When will those who moan about "non-traditional" stagings learn that stagings were traditionally of their own time? Think about Greek drama - staged in the simplest of surroundings in normal clothing with only masks for fantasy. Decor does not in itself make drama. It's the intelligence behind the staging that makes it work. This Elektra is unnerving, as an opera as disturbing as this should be.
at September 22, 2013