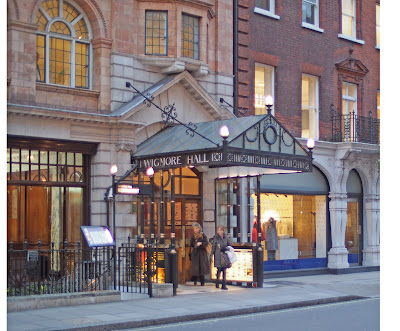 September at the Wigmore Hall  starts in great style. First, the finals of the Wigmore Hall International Song Competition on Tuesday, then the Gala Opening Concert of the 2013/14 season on Saturday. Bryn Terfel and Simon Keenlyside sing Schumann and Schubert with Malcolm Martineau.  Then Thomas Hampson and Wolfram Reiger on 14th. The Big Guns are being brought out in force !

Hampson is one of the great Mahler singers of our time, so his programme, built around Mahler and his circle should be good. Amazingly, seats still available. Roma Trekel is singing  similar programme minus Mahler but few come even close to Hampson, so Hampson is the one to go.

Matthias Goerne makes a welcome return to the Wigmore Hall. He doesn't do lollipops.  On 25/9,  he's singing Schubert but accompanied by Sarah Christ, a harpist. Schubert played guitar, and there are many settings of Schubert for guitar, especially for tenors. But the harp offers even more intriguing possibilities, and might well be better suied for baritone. Don't miss this. The like may not come round again soon.  I'm also going to Goerne's concert on 27/9 where he's singing Wolf and Liszt with Andreas Haefliger. Piano song, but a challenging programme including Wolf's Drei Gedichte von Michelangelo, which suit Goerne's voice and temperament perfectly. Goerne's also singing Liszt, who was not the most intuitive composer for voice, which puts more emphasis on the singer.

Anne Schwanewilms is singing Debussy and Schumann Liedekreis op 39 on 9/9, but note that Angelika Kirchschlager's singing that too on 30/9. They will be very different, for sure. Kirchschlager, accompanied by Helmut Deutsch,  is also singing Beethoven and Haydn - quite an unusual programme which will be worth hearing. Ian Bostridge sings an all-Schubert recital on 13/9 with Julius Drake. After his magnificent Britten Les Illuminations at the Proms (review here).


A Mozart rarity from Ian Page and Classical Opera : Die Schuldigkeit des ersten Gebots K35 on 24/9  This was written when the composer was only eleven. Some good ideas there like sudden flourishes, especially in the soprano part that make you jump til you remember it's a small boy's idea of high jinks. Often it's very studied, which is hardly surprising since Mozart (and his Dad) are showing how clever they are,  but it's lighthearted and charming. Not bad for a depiction of the First Commandment.  Plus lots of interesting piano and chamber music. Looks like I'll be at the Wigmore Hall every other night.