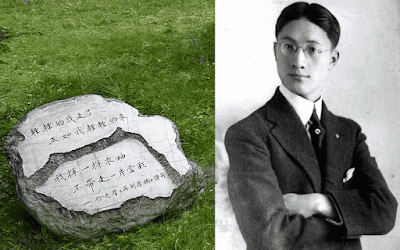 By the banks of the Cam in Cambridge, a rock dressed with Beijing marble, with an inscription that reads : "I leave as quietly as I came. I am quiet, gently flicking my sleeve, taking with me not even a wisp of cloud".  The poem is by Xu Zhimo (徐志摩) (Tsui Tsemor) father of modern Chinese poetry.  The title "Second Farewell to Cambridge" (再別康橋) is poignant. This wasn't Xu's first Cambridge farewell.  He studied at King's College in 1921-22  and had written an earlier poem about the city.  He returned in 1927-8. Perhaps he planned to return again, since he loved the place so much.  But three years after this poem was written in November 1928, he was killed in a  plane crash, aged only 34.

The poem is beautiful because it's so subtle.  It begins with the lines on which it will end "Quietly I now leave the Cam, gently waving farewell to the western skies where a golden willow stands, like the bride of the sunset."  The tree is rooted and will not leave, enduring after the poet is gone. Its branches dip over the river where rushes and duckweed throng, moving in the river's flow. Suddenly a vision : in the dappled waters and weeds, Xu sees a rainbow, shimmering as if in a dream of purity and promise. If only he could be like these weeds, But he moves on, poling his punt  towards the fields beyond, not returning until the skies are lit only by stars and moonlight.  But the images of silence return : on this evening, even the crickets are still, and do not sing. So "I leave as quietly as I came. I am quiet, gently flicking my sleeve, taking with me not even a wisp of cloud". The reference to the sleeve is significant.  Though Xu and his friends usually wore western dress, the poets of the past wore traditional garments with wide silk sleeves, so refinement was built into their slightest movemnent. In this tiny detail, Xu connects past to present,  Cambridge to China.  The deeper levels of the poiem address impermanence. The cloud, for example, cannot be "taken" because it is immaterial.  The flow of the river cannot be stopped, even though for a moment one can enjoy the pools and eddies.  The poet is quiet, because silence suggests that time is standing still : any sound might break the spell. Yet there's so much sadness : when the poet arrived, he  changed nothing, and when he leaves without changing what he loves so dearly.

Though Xu died young, his legacy is immense.  His poetry is immortal, but he also transformed the role of poetry in modern China. He adapted traditional form, using vernacular as well as scholarly form. In his personal life, he was also progressive and forward-thinking.  The women in his life were emacipated New Women, from a generation inspired by the reform movements of the time.  One of his lovers was Lin Huiyin (林徽因). Ironically, she was turned away from architecture at a US university because she was female.  Eventually she qualified, and with her husband Liang Sucheng (林徽因) pioneered the study of ancient Chinese architecture, their expertise used in urban planning and restoration.  Xu's affair with Lu Xiaomen (陆小曼) scandalized Chinese society as both were married to other parties at the time. Lu, too, went on to be a well known artist.  This background helps to explain the image of the willow tree as bride. Xu was not against marriage, but a passionate believer in the ideals of love. In Chinese culture, marriage means children, continuation and the future. In Cambridge willow and river belong together in symbiosis.  Because the poet cannot change that, he has to move on.

Xu's Farewell to Cambridge is so evocative that it's inspired many musical settings, nearly all of them Chinese. A few years back, Cambridge commissioned a setting by John Rutter, which wisely retained the Chinese text : it's quite an achievement for the singers of King’s College Choir to learn to sing in Mandarin.