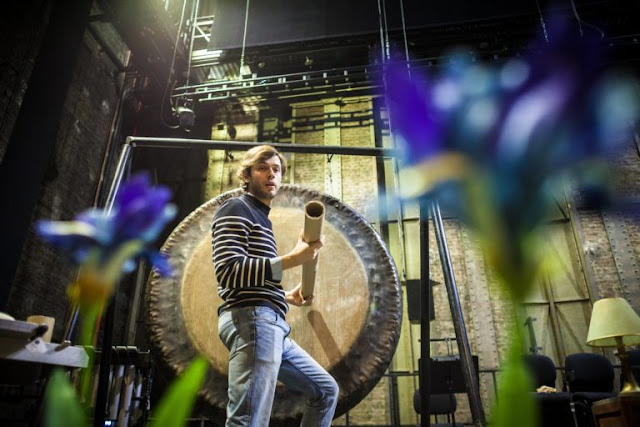 Event of the Year - Karlheinz Stockhausen Donnerstag, at the Royal Festival Hall with the London Sinfonietta  (Maxime Pascal conductor) fully staged by Le Balcon. Those lucky enough to have been there will never forget !  Stockausen is so visionary that it's almost impossible to constrain his work. Hence the importance of approaching it as sensory experience, so it operates on the mind and imagination. In Stockhausen's Licht ideas of Music as Light and Enlightenment are presented as mega saga, shaped in the context of cosmic struggle.  Donnerstag was the first opera written in the series, so it's an ideal introduction to the saga and to Stockhausen's work as a whole.  There's no need to grasp it in its entirety : listeners are participants in a continuing creative process. To be human, as Stockhausen implies, is to be sensitive and open minded.

Donnerstag starts even  before the audience enter the concert hall  A small ensemble play a "Greeting", a prelude that will be matched by an epilogue at the end.  The First Act, "Michael's Jugend" is relatively straightforward, by Stockhausen standards, and loosely autobiographical.  Even as a child, Michael is confronted by polar opposites, a loving mother who may be insane and a brutish father who can't comprehend.  In miniature, the cosmic battle that is to come. Each character is muliplied, to develop different  facets of the avatar.  Michael himself is potrayed in several guises : as a boy who moves but does not speak, as a trumpeter (Henri Deléger)  and two different tenors, Hubert Mayer and Safir Behloul.  The mother Eve is shadowed by a trio, Iris Zerdoud (basset horn), with Elise Chauvin (soprano) and Suzanne Meyer (dancer). Michael's identification with his mother connects to his sexual awakening and thus to his creative birth as an artist.  Negqtive forces are represented through Luzifer (Damien Pass, bass, Mathieu Adam, trombone, and Jamil Attar, dancer).

This multiplication of roles also extends to the orchestra. The London Sinfonietta, conducted by Maxime Pascal, is augmented by the Royal Academy of Music Manson Ensemble. Even more radically,  physical instruments are shadowed by the invisible" that is the sound desk, projecting sounds that bounce and resonate to fit the dimensions of the performance space,  "organic" sounds seemlessly blending with computer generated technology. The music on stage and from the sound desk  (Florent Derex, Augustin Muller) is further developed through video design (Yann Chapotel) and atmospheric lighting (Christophe Naillet)., and even more by the  staging by Benjamin Lazar.
Lazar’s staging  is very perceptive, amplifying the meaning in the score. Stockhausen's fascination with patterns, codes and the symbolism of numbers is not accidental. Runes exist in all cultures, on this planet and perhaps in places beyond our comprehension.  Runes are a means of expressing  the unexpressable.  The detail in this staging by Le Balcon is not accidental, either. Dancers, singers and musicians move in stylized patterns,  emphasizing connections, evoking mysterious ritual.  At first Michael's voice is the tenor ( Hubert Mayer), but as his identty develops,  his musical avatar, Michael-as-Trumpet takes over. The part is huge and demanding, but Henri Deléger holds the whole opera together, from beginning to end : a true virtuoso performance, full of depth and intensity.   The trumpet, too, is shadowed, paired with basset horn and clarinet, each well defined : both of them are Woodbirds to the trumpet, leading it, like Siegfried, on a journey of self discovery.  These three instruments joyously interact,  reinforcing the concept that positive relationships are inherently creative.

In contrast, the Trombone (Mathieu Adam) represents negativity and repression.  Stockhausen grew up during the Third Reich and knew how destructive authoitarianism could be. If he was often obsessive in his own life, it was more a matter of focusing things in his own mind than forcing them on others.  The trombone is Luzifer's signifier, surrounded by a gang of bassoons, contrabass and other winds.  Gang members don't question. But what to make of the tuba, with an even deeper range ? At first the tuba supports the trombone as it duels with the trumpet, but it's placed centre stage, by the piano, gradually moderating until it supports the trumpet.  While "Michael's Journey Around the World" is colourful (Balinese bells, African drums)  the second half of the Second Act is much more rewarding musically because the instruments tell the story on their own.  The physical world "outside" pales into comparison with the inner world of creative relationships.  Michael and Mondeva  (trumpet and basset horn) dialogue in harmony.

This sets the stage for the critical third Act, "Michael's Heimkehr". As a child the young Micheal guessed where his identity might lie.  In word games on his name he sang "Mich-a-hell", "hell" meaning "brightness" in German.  The three Eves return, representing not the Three Graces so much as the embodiment of light and growth. The  "Young" Michael the dancer's hand gestures suggest upward growth, rustic diagrams of trees being projected on the screen behind.  The singers are no longer alone. Members of the New London Chamber Choir, file into the auditorium, supplemented by more singers in the upper balcony.  Voices fill the performance space. Even when they exhale wordlessly, they represent humanity.  Luzifer had been the highest of angels but rebelled when God chose to be recreated in man.  God punished him by imprisoning him in hell (in the English sense of the word), the bowels of the earth, where he lurks, waiting to cause trouble.  suddenly the calm on stage is shattered by violent tumult.  The trombone blares and a grovelling figure crawls in, his head hidden by a globe, which may reference Michael's travels, but more pointedly refers to the struggle between God and Luzifer over mankind.  Michael as trumpeter does battle with Luzifer as trombone and Luzifer retreats, enraged.

In the last scene, "Vision", the three Michaels (tenor, dancer and trumpeter) materialize, as a Trinity.  They are surrounded only by light, symbolizing the ideals of creative truth.  Donnerstag doesn't end there, though. Just as the "Greeting" at the beginning was a prologue, the Epilogue"Donnerstags-Abschied"  takes place outside, with five trumpeters playing in unison in the open air, in this case the fifth floor balcony of the Royal Festival Hall, looking out over the Thames and onto a night sky with moon (Mond-Eva) and stars.  The London Sinfonietta have had their ups and downs, but in Donnerstag they were in their true element. Stockhausen is, and should be, a London Sinfonietta thing : audiences can rise to the occasion if they're given something as good as this to engage with.  Exceptional solo playing, and solo singing too : Deléger and Adam, with Safir Behloul (wise Michael) and Damien Pass (Luzifer) utterly impressive.
Lots more on this site re Stockhausen and the London Sinfonietta
at May 22, 2019