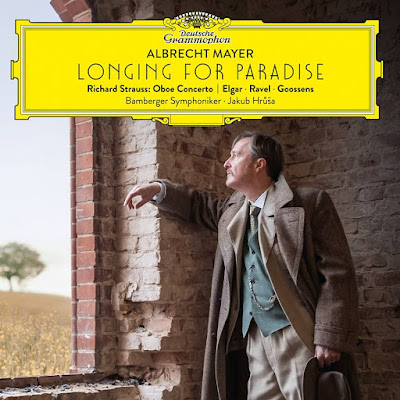 "Longing for Paradise", oboe concertos by Richard Strauss, Elgar, Ravel and Goosens with Albrecht Mayer, and Jakub Hrůša conducting the Bamberger Symphoniker, new from Deutsche Grammophon.  "How does an emotional, sensitive and romantic composer react when faced with the reality of war and a destroyed homeland"?  writes Mayer, describing the choices on this eclectic programme - Richard Strauss's Oboe Concerto, Elgar's Soliliquy for oboe and orchestra, Eugene Goossens Concerto in One Movement and Ravel's Le tombeau de Couperin.  An intelligently planned programme, executed extremely well, makes this disc a top recommendation.  It soothes my soul and stretches my mind !

Richard Strauss's Concerto for Oboe and small orchestra in D major (AV 144), receives an outstanding performance, Mayer navigating the technical complexities with finesse. The Allegro moderato begins with a tour de force section of 57 bars which focus attention on the oboe. Gradually, orchestral textures build up around the oboe.  If Metamorphosen was written in response to the destruction of war, the Oboe Concerto might represent a reflection on the past and future, the strings in Metamorphosen replaced by the deeper sounds of winds, the oboe supported by flutes, cor anglais, clarinets and bassoons.  The serenity of Mayer's playing has purpose, evoking the balance of an idealised past.  As he notes these beauties are "perhaps an intimation of Paradise". There are no hints of Strauss's typically ambivalent waltzes, no ironic fractures. Instead interpretation requires "maximum effortlessness. Perhaps Strauss himself soared in something like the pure riches oif its euphony when he wrote it". The Andante is exqusite, enhanced by a sense of melancholy, the oboe singing gracefully.  The Vivace-Allegro is lively. With extended solo passages the oboe leads the orchestra in full flow towards the confident conclusion.

Edward Elgar's Soliloquy is also a late work, written in 1930 for oboe and piano for Léon Goossens, though only the second movement was completed.  The arrangement for oboe and small orchestra heard here was made in 1967 by Gordon Jacobs. The oboe line stretches expansively, the orchestra responding with hushed tones, before fading elusively away.  Also originally conceived for oboe and piano, is Eugene Goossens's Concerto in One Movement for oboe and orchestra  (op 45, 1927).  The  piece traverses different styles - pastoral, energetic, and exotic - the oboe part redolent of Prélude à l'après-midi d'un faun or even The Firebird, though with a touch of wry humour.

Maurice Ravel's Le Tombeau de Couperin, is as much an hommage to French style as a a series of memorials to Ravel's friends who died in the 1914-1918 war.  A vivacious Prélude, with the oboe as lithe and athletic as a creature of the forest. The dance origins of the Forlane are sprightly,  every "step" in the music vivid.  The more formal Minuet and the Rigaudon are vigorous, but beneath this lies sorrow,  Oboe and strings interact, two voices entwining like partners in a dance, an allusion that connects the living and the dead.
at May 20, 2019