Ma Sicong (馬思聰) (1912-1987) (Ma Sitkong) is a composer everyone should know, Chinese or not, because his music can be exquisitely beautiful. The latest recording, Ma Sicong Music for Violin and Piano Vol 2 , has been top of my listening list for many months. It's heart-breakingly poignant and intimate. This is the disc I turn to most,despite all others, because it's so emotionally potent. That's why it's  been difficult for me to write about it because I can't do it justice.

Ma Sicong is an icon in China. He was more  prolific and less ideological than Xian Xinghai (冼星海) (Chang Singhoi) who died young. Ma was extremely influential as he was a virtuoso violinist and charismatic teacher. He had integrity and dignity, despite persecution. His story has meaning for all, Chinese or not.

Western classical music was well established in China even during the late 19th century. Educated, modern-thinking Chinese were open-minded and well aware of European trends. Studying in Europe was the norm for anyone progressive who could afford it (and for some who were poor and held on). There were full conservatories in Beijing and Shanghai, but Ma's older brother lived in France, so 11 year old Ma, already a prodigy violinist, went to Paris.

Ma's music is firmly in the western classical tradition, though he was naturally immersed in Chinese sensibilities. Indeed, that's why learning  Ma's music for violin and piano is a key to his wider repertoire. The violin is not unlike Chinese instruments like the erhu.  Traditional Chinese music is a lot like chamber music, played solo or in very small ensembles. The scholarly ideal of refinement was to play an instrument and make music, much like writing poetry or painting, to be enjoyed in intimate, private surroundings. Folk music, too was often individual, like solo flautists and string players. Most people in the West think of Chinese music as garish and strident, like Beijing opera, but the reality is quite different. 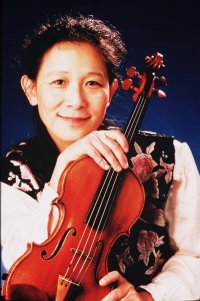 Hsiao-mei Ku is the violinist on the disc I love so much. She, too, was a child prodigy, from the same province of Guangdong. There are precious photos of her playing a child-size violin, and Ma beaming with appreciation. The photos are precious because the Red Guard movement  changed so much. All music, even non-political Chinese music, was considered degenerate. Ma was the top person in Chinese music education, protected by Zhou Enlai (who also studied in Paris), but even he was humiliated in the Cultural Revolution. Ma and his immediate family made a dramatic escape,,first to Hong Kong and then to the United States, where he died in exile. (His brother was punished and his French sister-in-law committed suicide). Hsiao-mei Ku, being much younger, didn't have the same connections. Her violins were taken away. She was forced to clean pig stables and undergo other horrors but eventually made it out, where she now has tenure at Duke University.

This background does have a bearing, because Ku's sensitivity to Ma's music is intense, and she learned from the composer himself. Her work is perhaps definitive. Her playing is exquisite, complete control over the very long, keening legato. Yet there's energy, wildly animated strength and resilience. Most impressive of all, she understands the soul of this music, its context and sense of yearning. What comes over strongly is Ma's love of China, so deep it's embedded in his very nature. This love for music, for art and for humanity transcends the traumas of his life and makes it so inspirational.  Ku is supported well by Ning Lu, the pianist.

If anything, this second volume of Ma's music for violin and piano is even better than the first. (Read about the first CD HERE).  In this second disc, there's no need to play up the "Chinese" character of Ma's music. It stands on its own terms, very much in the western mainstream but original and distinctive.

Spring Dance (1953) starts with an assertive exposition that zig zags confidently and is strikingly modern. It opens out to a quieter central section marked by a lithe, lovely solo violin, before reprising the assertive theme. Simple, but extremely distinctive. Similarly, Rondo no 2 (1950) has the purity of folk music, even though these pieces are definitely sophisticated art music. Ma has absorbed the essence of traditional music and can create something highly individual. Think Bartók. Melody (1952) is almost wholly western, the piano part providing firm support for a violin melody that develops inventively.

Ma's Violin Sonata No 3, written in 1984 towards the end of his life, is particularly moving. The piano part is luscious, romantic without being sentimental.  The violin starts delicately but moves on to a crescendo of great vigour. If this sonata expresses nostalgia, it's also imbued with confidence. The allegro vivace movement is refreshing.

The Gaoshan Suite (1973) is more specifically Chinese in intention, with its references to customs like Calling Back the Spirits. But don't expect pastiche. Ma is far too good. This music could easily stand on its own in any western programme. The "ghosts" here have universal meaning. More "Chinese" in the sense of pentatonic harmony is Ballade (1952)  . The violin sings a melody that for me evokes powerful feelings of nostalgia and intimacy. Maybe other people won't have the same connotations or memories, but anyone who's moved by RVW's The Lark Ascending will be moved by this too, though it's more of a miniature.

The backbones of this disc are the three Rondos.  Rondo no 3 and 4 (1983) are separated from Rondo no 2 by thirty years in which Ma Sicong's life underwent extreme upheaval.  Yet Rondo no 2 starts cheerfully, a skittish melody that seems carefree, even when Ma pushes the violin into angular rhythms. Basic cells repeat, but overall the mood is forward-thinking and positive. Ku and Lu separate the two late Rondos with Ballade, emphasizing the passage of time, like a brief Rückblick. Thus Rondo no 4 feels like an explosion. The piano part almost bursting with determined expressivity. It's intense and dark, yet the violin, which perhaps "speaks" for Ma himself, dominates, defiant with an almost demonic strong sense of purpose  Whatever Ma experienced in life, he wasn't going to be intimidated or robbed of the  life force music gave him.

Please consider buying this disc. It's not expensive (it's Naxos) but if it gives you as much therapeutic sustenance as it's given me, it's value is beyond money. Please see my other posts on Ma Sicong, Chinese music, unusual instruments etc. This is a genuinely multicultural site.
at November 18, 2010