Schreker Irrelohe - the flames of madness 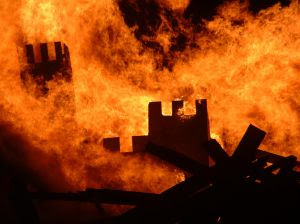 Famously, the name Irrelohe came to Franz Schreker when he heard a train station master call out the name of a tiny hamlet. The name's mellifluous, the meaning is not. "The flames of madness" The plot's  straight out of a horror movie.

Dramatic overture, pulsating cadences like some somnolent monster. Wind instruments whip upwards - a hint of flames and smoke. The word "Irrelohe" repeats throughout. Irrelohe castle stands menacingly above the village. Long ago an Irrelohe ancestor had a relationship with an immortal spirit. All Irrelohe men since are cursed. They'll suddenly go insane, attack a virgin and die.

A peasant called Peter is in love with a beauty called Eva. Idyllic, except that Peter's mother is deranged by some trauma  in her past. Amazingly, Peter doesn't know the local legend or who his father might be, until sinister stranger Christobald arrives who seems to know many secrets. On Count Irrelohe's wedding day, 30 years ago, the village was making merry. Suddenly flames leapt out of Graf Irrelohe's head, his eyes bulged and he ravished a red (flame) haired village maid violently in front of the whole community. Then Christobald  reveals that he was due to marry the girl who was raped. No-one of course did a thing.  Class warfare, disguised as medieval romance. Graf Irrelohe went on to have other children but died insane. Christobald left the village and became a wandering minstrel. Ein Spielmann - follow the link for more. Schreker's connecting to a long German tradition  but deals with the violent sex without shirking. No euphemisms,, no romantic gloss. In 1922-4 when the opera was written, ideas of sexual aberration were being confronted for the first time. Schreker links a traditional German icon to depraved psychosis. It was shocking. No wonder Schreker gained a reputation for being "unhealhy". His relative obscurity after his death is blamed on the Nazis but in fact there's a lot more behind it. 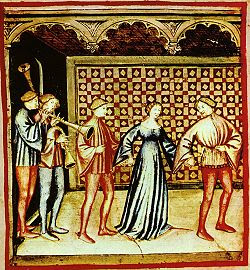 Musically Irrelohe is disturbing because Schreker combines rhythms of traditional German drinking songs and dances with discordant dissonace. It's not specially modern but makes deliberate references to Wagner - Loge's flames, Irrelohe's flames, (hear the link "lo"  in the music)  Wotan protects his daughter from sex, while other women are destroyed by curses and power structures. Cosima would have hated Irrelohe whatever Schreker's ancestry might have been. Richard Wagner, I suspect would have loved it (though there's no competition between Wagner and Schreker in musical terms).

Demonism, too. The parson, the miller and Eva's father, the forester, meet at the crossroads. There's the usual icon of a crucifix, like you see all over Germany and Austria.  They're there for the pious to stop and rest, but also because in mythology, crossroads are vulnerable places where the Devil can enter. This cosy village Trinity leaves, replaced by a much more malevolent trinity. Ratzekahl, Strahlbusch and Fünkchen are Spielmännern too, musicians who turn up out of nowhere. Ostensibly they play at village parties - where drink is served and inhibitions lower -  but they're also faintly dangerous. Christobald's their leader. Gott, Mensch und Tier, sie sündigen alles, Nur durch Feuer kann Friede werden (God, man and beast, all sinners. Only through Fire can peace be reached.) 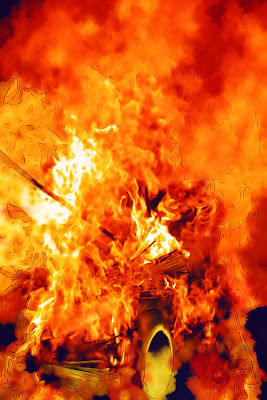 Think back to Der Feuerreiter, Eduard Mörike's poem inspired by ancient folk legend. He's an elemental who suddenly appears destroying the village economy in a holocaust of flame. The devil, maybe, but also a creature of nature. Just as the Feuerreiter appears first as a glimpse of a red cap, someone's spied  ein greisgrau Männlein mit einer Spitz, roten Feder am Hut (an ash headed dwarf with a pointy hat topped with a red feather)  Something's in the wind, says the forester, lots more fires than usual this year.

Meanwhile Eva has met Graf Heinrich, the current Lord of Irrelohe. He's seized with an irrational passion for her, but the madness hasn't taken over yet. In fact, Eva lusts for him desperately, she'd hardly resist. They decide to marry then and there. What a coincidence that Christobald and his Spielmännern have suddenly materialized.

However it's not Graf Heinrich who jumps a virgin, but Peter, crazed by his unrequited love for Eva.  Tie me up, he begs his mother, or I'll do something bad. Like turn into a werewolf, or the first born son of the last Lord Irrelohe. Heinrich is the second son, the Count raped Lola on his wedding day 30 years before. Now Heinrich must duel with Peter who is the living image of their father. Freudian minefield. The text ending's trite. Eva and Heinrich welcome the flames that destroy the castle (and presumably his mother, servants and fortune). Yet the idea is liberating, getting rid of the baggage of the past. Schreker's music has the last word. It swells up majestically, crackling with infernal energy. Götterdämmerung in a quaint rustic context. Schreker's not as good as Wagner, but wow, this is dramatic, and sinister. Eva and Heinrich think the fire is purifying because it ends their curse. In Irrelohe, the curse was caused by sex, but Die Spielmännern live on to wreak havoc elsewhere. There'll be other fires to come, and worse.

Schreker is currently fashionable because Bard discovered the comparatively twee Der ferne Klang. which is heard in full production in major European houses like Zurich. That opera contains fallen women and haunted men, but Irrelohe takes obsession to extremes. Musically it's altogether stronger and more pointed. The Spielmännern are like demons, emerging from the unconscious, destroying order and reason. After the social upheavals of the 1920's it must have been hard to take. Last month there was a production of Irrelohe in Bonn, at least the third since the Schreker revival thitrty years ago. Unfortunately, there's only one recording, a fairly basic live performance recorded in 1989,  unexceptional singers and the Wiener Symphoniker, who are not the Wiener Philharmoniker. But imagine Irrelohe performed by players who think beyond the idea that Schreker's no more than late, late Romantic. Ingo Metzmacher, we need you.

Thanks to a reader who knows this opera well,, here is a link to the current Bonn production which is apparently "outstanding". Complete with video. Review above. The production continues to Feb 2011. Look at what else is on in Bonn ! Puts Bard into perspective.
at November 25, 2010