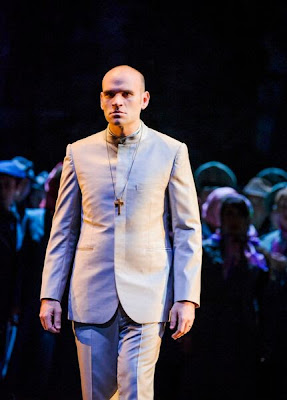 Donizetti Poliuto at Glyndebourne could well become one of of the great Glyndebourne classics.  It makes a powerful case for the opera, and also for Glyndebourne's artistic vision. Poliuto isn't standard repertoire - it's nothing like L'elisir d'amore - but this brilliant production and performances show what a powerful work it is.  Political repression,  religious intolerance and persecution are all too relevant today. Poliuto packs an emotional punch. We should heed its message

Donizetti's source material was a play by Corneille, written two centuries previously. Polyeucte (Poliuto) was a nobleman in an  outpost of the Roman Empire. The opera begins with brooding, murky music with a hushed but fervent chorus. Christians are meeting in secret. Three hundred years after the death of Christ, being a Christian was dangerous. Most early Christians were poor, an underclass inspired by the doctrine of heavenly rewards for earthly suffering. In a militaristic state like Rome, the idea that the meek might inherit the earth would have seemed dangerously subversive, tantamount to overthrowing the basic values of social order. Towering columns of what appear to be rough-hewn stone overwhelm the figures below, at once a depiction of the harsh conditions Christians faced, yet also the strength of their faith.

The opera begins with murky music suggesting shadows, and a hushed but fervent chorus. Into this darkness Poliuto (Michael Fabiano) appears. He's a nobleman, an outsider. Is he a spy? His friend, Nearco (Emanuele D’Aguanno), is a convert. and Poliuto wants to find out why this strange new faith holds such allure.  Poliuto's troubled because he knows that his wife Paolina (Ana María Martínez) is still in love with Severo ( Igor Golovatenko), who she thought had died. Since Severo is now a Proconsul, with authority direct from Rome, this love triangle has toxic political complications. Severo's costume suggests Mussolini, who defined Fascism. His guards resemble Mussolini's secret police. With a wry tough sense of humour, director Mariame Clément  has them smoking cigarettes.

Enrique Mazzola, a bel canto specialist, conducted the London Philharmonic Orchestra. Last November, Mark Elder conducted Les Martyrs,  the French version of Poluito which Donizetti created for Paris when Poliuto was banned in Naples. The LPO aren't a period instrument orchestra like the Age of Enlightenment for Opera Rara, but Mazzola used that to advantage, creating an almost Verdian richness of colour from the relatively small forces of a Donizetti orchestra. Mazzola seems to inspire great enthusiasm from his players. Hopefully, we'll hear much more of him at Glyndebourne (and in London) in the future. 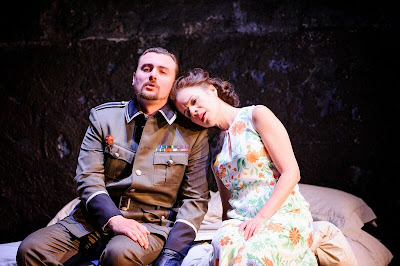 Severo and Paolina snatch a few moments together.  Martínez executed Paolina's arias with such beauty  that her voice seemed to shimmer. Good casting, since divine light seems to permeate this opera, despite the gruesome nature of the narrative. Donizetti gilds the vocal line with almost minimalist grace - delicately plucked strings, a single low flute, and the sound of the harp. For a moment, an image of a flowering tree is projected on the walls behind her  Martínez's voice blossoms with warmth that's all too soon extinguished.  When she and Golovatenko sing together, they're singing love duets tinged with frustration  and regret.  Paolina, though, is a paragon of virtue, a concept both Roman and Christian. 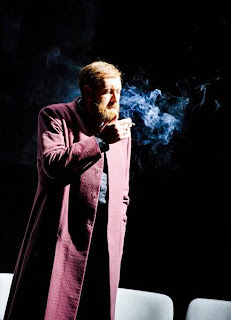 Regimes that feel threatened turn to extremes. In the Temple of Jupiter, the crowds are whipped up to bloodthirsty frenzy. Some of the chorus had been singing Christians earlier, or Roman guards: interesting irony. Matthew Rose 's firmly focused bass created Callistene, the High Priest with great authority. With Severo wavering, and and Poliuto turning Christian, it's up to him to hold up the foundations of the Roman Empire But Poliuto isn't afraid of death. He believes in the resurrection: worldly concerns are no match. The purity of Michael Fabiano's tenor rings so cleanly that Paolina is convinced that  any faith that can conquer death is one worth having, even if it means leaving her father Felice (Timothy Robinson) singing from a wheelchair, to underline his inability to morally stand on his own two feet. When Poliuto and Paolina die, we don't need to see blood and guts. Being True Believers, they're simply transformed in a blaze of light.  The designs (Julia Hansen and Bernd Purkrabek) with video projections,  b fettFilm (Momme Hinrichs and Torge Möller) were extraordinarily beautiful. Gorgeous washes of colour. Sets that move as seamlessly as this, and transform with such subtlety are a thing of wonder. Like Paolina, I thought I could hear the angels sing.

Was this the original version of Poliuto, without any additions from Les Martyrs back translated into Italian?

Thank you for authoring this blog and sharing your encyclopedic knowledge of classical music, especially opera. I look forward to reading it every day, and I learn something new each time.

Yes Rootie, this was Donizetti's first version, which the King of Sicily banned. D revised it for Paris as Les Martyrs.