Karol Szymanowski Król Roger  at the Royal Opera House, London. Szymanowski originally called it a "mysterium".  What is the key to the mystery that is Król Roger? What does the work mean, and why does it defy  most conventional measures of operatic form?  Yet that's precisely why it fascinates.  Just as dreams don't have boundaries, the secret is to approach it for what it is. Kasper Holten's production is so psychologically and musically astute that it gets very close indeed to the soul of this quirky,and highly original work.

The burgundy and gold luxury of the Royal Opera House auditorium is hidden in darkness. Strange sound emerge from the pit.  We're propelled straight into the drama without an overture. It's unsettling.  Are we eavesdropping on a secret  religious ritual?  The chorus sing with somnolent torpor, as if hypnotized by orthodox incantation. Yet this music also, oddly, suggests the rhythmic breathing of deep sleep. 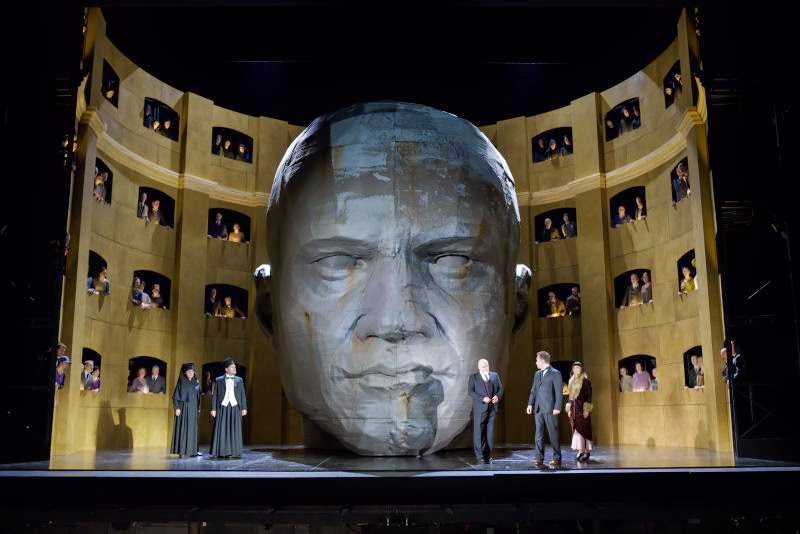 A huge head fills the stage. Is it King Roger, sleeping, about to embark on a tantalizing voyage? The head is a masterstroke of stage design (Steffen Aarfing).  For we feel literally close to the man it represents.  It's an inert figure, yet seems to come alive, with subtle lighting (Jon Clark) and video projections (Luke Halls)  that move and change with the music.  King Roger becomes human, the deeper he sinks into sleep. Sleep, dreams, images of night and stars, nebulous illusion - themes that recur throughout the libretto  and in the abstract music in the score. Sudden alarm! The Archbishop and deaconess (Alan Ewing and Agnes Zwierko) intone like Guardians of the psyche. The chorus rage, demanding that King Roger kills the stranger in their midst.

Significantly, Szymanowski gives little background information as to why this Good Shepherd (Saimir Pirgu) might be.  He just "is", plucked from nowhere by his God, who is, uncannily, as beautiful as he is. Pirgu's timbre is golden and seductive, evoking the images of sunshine,smiles and embraces in the text.  The god is Dionysius, of course, the god of wine, intoxication and altered realities. In vino veritas, as in dreams.. There's no need to dress the Shepherd up as bucolic boor or metallic robot (as in productions by Warlikowski and Pountney).  Here, he's a handsome lad in sharp threads, exactly what a King might fall in love with, were he so inclined. One of the joys of Holten's production is that it faces the idea of sexual repression with common sense and dignity. A King and a strict Christian is supposed to marry and reproduce, whatever his basic instincts. As the King's chancellor, Edrisi (Kim Begley), comments, the King hasn't kissed the Queen with passion for quite some time. 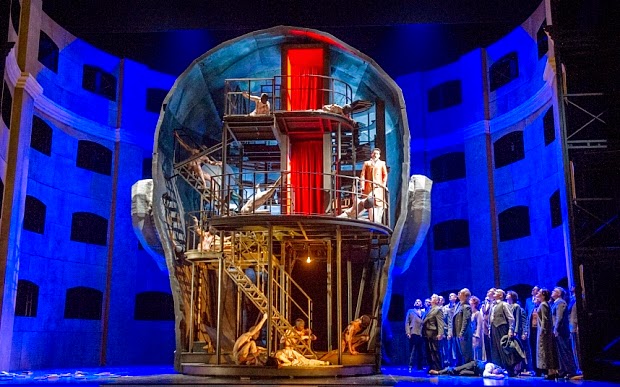 The Head turns round, at a leisurely pace, allowing us to exult in orchestral colour and complexity.  Antonio Pappano was in his element, conducting the orchestra so they seem to be enjoying themselves, inspired by the myriad colours and moods with which Szymanowski challenges them.  We hear Moorish themes, pungent and exotic, even an approximation of the ululating calls to prayer that ring across long distances. Indeed, the libretto specifically mentions, several times, that the call of the Shepherd rings out over long distances, arising, even from the waves in the ocean. We hear tambourines tinkle - gypsy calls, maybe, as potent to Eastern European imagination as the "Moorish" elements Szymanowski loved so well. The Shepherd's music is garlanded  by high-pitched violin obbligatos,  so typical of the composer that they're almost his fingerprint. Two harps were positioned in a box in the stalls circle, a stroke of theatre integrating sounds with visuals.
.
In the Second Act, the Head is fully reversed, showing the innards of the King's brain, so to speak. He may live in a palace, but in his head, he's trapped in a maze of steps and corridors, with flimsy--looking handrails. Not much safety or comfort.   Now, King Roger is confronting his fears. Mariusz Kwiecień is the King Roger of choice these days, having done the part so many times  He started well, but was under strain, thoughtfully disguised as part of the characterization. In the interval, Kasper Holten told the audience that Kwiecień was unwell but had bravely agreed to go on anyway. Massive cheer, for the star and also for the way Holten communicated the problem. Dance is very much part of Bacchic practice, so there are dances in the score and references to dance in the text.  Thus it was a very good idea to use dancers to express the sexuality which Roger cannot  directly address.  The dancers (all male) writhed in orgiastic excess, yet were cheerful  and  cheeky (in every sense) . Full body suits, which revealed yet didn't reveal, also very much  in the spirit of the opera.  How could King Roger resist? There's more humour in this opera than one realizes. The business of passwords, for example, which anyone could guess. Part of the Shepherd's appeal is that he smiles a lot . He knows that one doesn't have to be "in control" to be happy.

Queen Roxanne (Georgia Jarman), seemed to have a good time, too.   After all , it was she who sang of mercy, persuading Roger to suppress the Id of Church and State and meet with the Shepherd in secret  Roxanne's part is fearsomely difficult, but Jarman was excellent. She projected well, blending volume with rich tone: a strong, charismatic portrayal, even though the character is a cipher, an alter-ego of the King.  Much of the time she was singing wordless vocalise. . In conventional opera, we're supposed to hear  the words, but in Król Roger, communication comes in many different forms, as in real life. King Roger can't articulate his deepest feelings, so the music does it for him, in abstraction.  Words in this opera are much more impressionistic. Visual images proliferate in the text with such abandon nhat they could not possibly be illustrated in concrete terms. There are references to jasmine petals scenting the breeze, and to lotuses on the Ganges (odd in a story supposedly set in Sicily) . But night-blooming lotuses are botanically impossible. Szymanowski's more interested in the cumulative effect of exotic images than in narrative logic.  In this sonic dreamscape, arias and recitative would go completely against the surreal mystery. Król Roger is the opposite of an oratorio where the message is clear. It's also not so much opera but a dramatic orchestral  tone poem with voices.

In Act Three, King Roger is back in the structure with which the opera began. This time, no Head, but as himself.   A strange theme of sacrifice enters, without explanation. Such is the logic of dream. The Shepherd has gone up in a cloud of smoke to the heavens.  A real fire smoulders on the ROH stage - you can smell the gas that feeds the flames.  Into this pyre, chorus members throw what appear to be books.  "Love, hate, all empty words" sings  Kwiecień   No rule books to follow, no formulaic rituals. What happens to Roger in the end?  We don't know except that he greets the morning sun with delirious joy.  A bright light shines from the roof of the auditorium.  Has Dionysius connected with Apollo?  Or on some more esoteric level, has Roger sensed a new dawn?  Or has he just woken refreshed from a night of subconcious imaginings? Szymanowkski leaves the answers open, and Holten doesn't impose solutions.  In dreams, the subconcious throws up clues,  but it's up to us to intuit the answers. This Royal Opera House Król Roger faithfully respects the composer and the originality of the music.  Would that audiences and critics knew the work so well. So perhaps  this Król Roger will help people start their own journeys into the wonderful world of Szymanowski. !