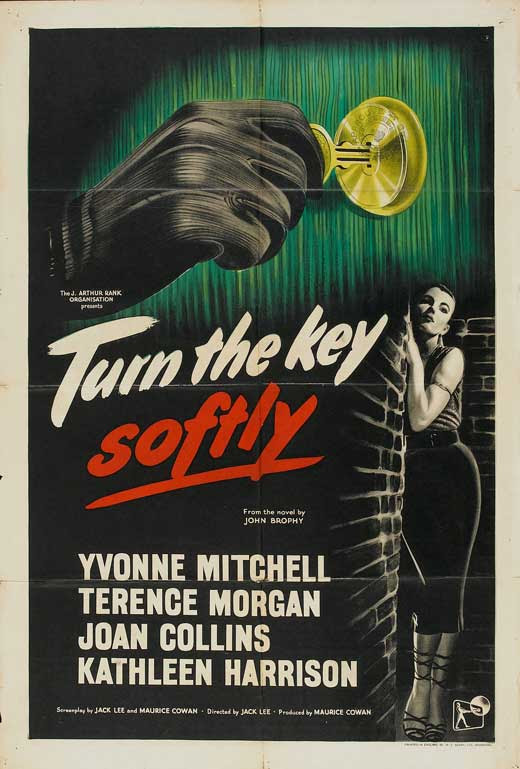 Not many films start with credits like: "We acknowledge with gratitude the help of the Home Office, The Prison Commissioners and the Governor of HM Prison, Holloway".  Turn the Key Softly begins with a shot of Holloway Prison,  as it was in 1953. It's oddly nostalgic. Veiled in heavy London fog, the prison looks mysterious, almost romantic.,Within minutes though, we're up against reality. Three women prisoners are being released. The scene's filmed inside. The guards are dehumanized - you can almost smell the repression. In prison, the women are anonymous. They collect their belongings to return outside. "Until you see people in their own clothes, you don't realize what you've been mixing with in this place" Who's that familiar face - Joan Collins  aged 19, dolled up in a deliciously bizarre peplum, which sums up the personality of her part, Stella Jarvis, flibbertigibbet good-time girl.

London itself stars in this film. The camera lingers, lovingly, on scenes shot on location. Monica Marsden ( Yvonne Mitchell) goes home to a flat in a terrace near St Mary's, Bryanston Square - nothing has changed in 60 years !  We also see another part of London which has disappeared, though - rooming houses in run down Victorian mansions, seedily keeping up pretensions. The landlady lets Mrs Quilliam (Kathleen Harrison) have her old room back. It's unchanged. The landlady's even looked after Johnny, the dog. Imagine landlords that laidback now.  Onc scene seems to have been filmed in a real pub, not a set.  Few pubs look like that now.  We see the Underground, pristine and spotless, and Trafalgar Square minus tourists. We see the West End, and something of London's future. Mrs Quilliam's daughter is "aspirational". She's escaped the East End for an identikit house in  some outer suburb and shudders at the thought of "lower class". The cinematography is so poetic that this film is a kind of love story for London.

Turn the Key Softly was written, produced and directed by Maurice Cowan and Jack Lee, at Pinewood Studios, when the British film industry was at its artistic peak. Based on a novel by John Brophy, it's a tightly paced drama, with deftly written dialogue, and strong characterizations, even in the minor parts - all of them London "types", lovingly drawn. Stella brags to her prostitute friends that her boyfriend's "in transport". Since the action all takes place within 24 hours, the narrative moves swiftly. Stella loses the £3 her boyfriend gives her to live on for a week, (!!!!) but gets it back by fleecing the stranger who thought he'd arranged a date with Monica. Unlike Stella and Mrs |Quilliam, who are feckless kleptos, Monica has never been in trouble with the law before. She was arrested because her boyfriend David (Terence Morgan) let her take the rap for one of his burglaries. Clearly, she loves him, but sees through his games. Thinking they're going to the theatre, she wears an evening gown. Now, you don't wear yards of tulle, even at Glyndebourne. David, however, has set up another crime. This time, Monica doesn't help. David is trapped on a roof, fighting off the police.  Wonderful cinematography again, worthy of much better known films noir. The camera shows the West End theatre in awkward angular shots. It's a wet night in theatreland : the camera contrasts textures: stone walls, cramped stairwells, metal fire escapes, the machinery with which the police winch themselves onto the roof. each frame adds to the sense of tension and danger.

The tightness of the script is further enhanced  by the clear-sighted anti-sentimentality of the plot. Monica is a strong person, determined not to be dragged down, like poor, dotty Mrs Quilliam, who gets killed by a car as she squeals in delight and relief, having found her lost dog. Stella's getting married, but how long will it be before she goes back to her old ways  Young as she is, she may squander her future and end up like Mrs Quilliam.

Mischa Spoliansky wrote the soundtrack and conducted the Royal Philharmonic Orchestra, when orchestras did movie work on a regular basis. Spoliansky was a star in German theatre and cabaret, before being forced into exile. In London, he built a successful  new career, writing scores for Norman Wisdom movies, and many others, including Sanders of the River and King Solomon's Mines. In Turn the Key Softly, Spoliansky's wit shines through. Stella sings trashy pop, but Monica's more sophisticated taste is underlined by quotations from Poulenc Les chemins d'amour.