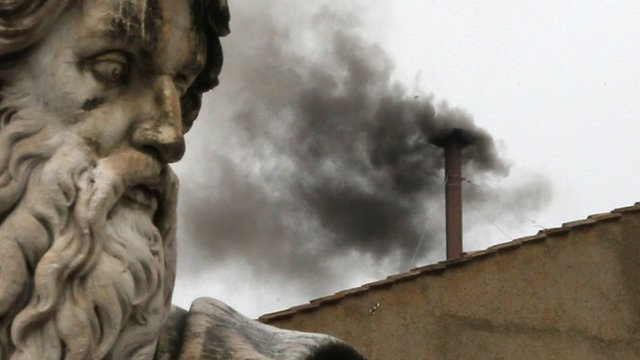 Latest on the Berlin Philharmonic's election of a new Music Director. Black smoke signals ! At the Vatican, when cardinals elect a new Pope, white smoke signals indicate a decision has been reached. Black smoke signals signify impasse.  The Berliners haven't decided. Far from that being a problem, in many ways, it's a sign of strength.  There is a lot more at stake than choosing a new conductor. It's a sign of maturity that these musicians are thinking seriously about where they want to be in 10 or 15 years, and can compromise when they can't agree. .Rushing to rash judgement isn't wise in most things in life. Much better that the Berliners take their time to cogitate. The sky won't collapse.

They won't stop playing, for one thing. They'll simply continue working with different conductors and contenders as they've been doing for years. The members of this orchestra are so good, and so well connected that  they can afford to look after themselves. The Berliner Philharmoniker "brand"  will survive.  If anything, the brand will be enhanced because the members of this orchestra are thinking about why they operate.  So hooray for them ! Here's the press release in full :

"Orchestra Board member Peter Riegelbauer said: “After an orchestra assembly which lasted 11 hours, we have unfortunately come to no decision. There were positive and lively discussions and several rounds of voting, but unfortunately we were unable to agree on a conductor.”
123 members of the orchestra who were eligible to vote were present. Riegelbauer continued: “We must continue this process and this election. That will have to take place within one year. We are very confident that we will come to a decision then. The process of this election will be continued, and the orchestra assembly will meet regularly, but we will take the time that is necessary. That can last one year.” The mood during the assembly was described by all participants as very constructive, cooperative and friendly."

Earlier in the day there was a rumour, quickly denied, that Andris Nelsons had been chosen. When, hours later, nothing was confirmed, I thought, either the election's too close to call, or someone's looking into other ramifications.  I don't believe the story that Nelsons turned the offer down of his own accord. Otherwise why run at all ?   A few months ago, he said he was "too young" for the job, which fooled no-one.  Furtwängler was younger than Nelsons is now when he took up the job, and in an era when age was more feted than youth. Delaying the vote gives breathing space for a lot of different parties. Nelsons is probably kicking himself for grabbing a pawn and sacrificing the King. Last week, the British electorate were forced into divisive polarization, resulting into extremism which may not reflect what people really want. Let's hope that the Berliner Philharmoniker won't be pushed into such corners.
at May 12, 2015