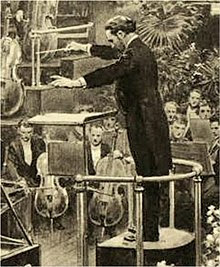 Booking starts Saturday for the 2015 BBC Proms. As always, have your choices in hand before the mad rush starts. Thousands will be logging on for non-classical music events. This season must be the least classical music oriented Proms ever, filled with gimmicks, chat shows, game shows and infomercials. .Sir Henry Wood, who founded the Proms,  believed good music spoke for itself, and that ordinary people could listen and learn without the blare of muzak and fabricated  opinion.  He must now be rolling in his grave. How long before his bust gets replaced ?

Even what remains of classical music seems to have been designed by machine, or perhaps by a committee of bureaucrats who don't really care about music. Wade through the dross and there's gold, though. I've picked out the grains of gold, which will be enhanced by the experience of being heard live at the Royal Albert Hall. Otherwise, a lot more listening on the radio this year.  Further group of picks chosen for unusual repertoire, though the performers aren't ideal. Some I've left out simply because they've been heard so many times.

Prom 1 : 17/7  Who could miss The First Night of the Proms with choral blockbusters on the theme of Belshazzar's Feast ?

Prom 47 : 21/8  Jón Leifs Organ Concerto, truly spectacular with the Royal Albert Hall organ, the second biggest in the world, and in a performance space no ordinary concert hall can  match.  With Beethoven 7, Sibelius Tapiola and an Anders Hillborg premiere, this should be theatre as  much as music. Sakari Oramo, BBC SO

Prom 49 : 22/8  Andris Nelsons, Mahler Symphony no 6. While Nelsons isn't an ideal Mahler conductor, he's very, very good indeed - lots to learn from, even though we may have to endure yet more Brett Dean

Prom 55 : 26/8  François-Xavier Roth,  one of the most fascinating conductors conducts a Boulez tribute, with SWR Symphony Orchestra Baden Baden, where Boulez's conducting career was launched 60 years ago by Hans Rosbaud. In January, Baden Baden gave Boulez, who's lived there ever since, the Freedom of the City

Prom 58 : 29/8 Sibelius Kullervo Three high profile Kullervos this year, Helsinki's choreographed version (more here), another at  the Edinburgh International festival and this, with Sakari Oramo, the BBCSO and Finnish soloists.  Bound to be good !

Prom 38 13/8  Messaien Turangalîla Symphony, one of three Turangalîlas this year (top choice is South Bank, Salonen on 28/5) This one will be interesting as it's paired with John Foulds, who also liked experimenting with exotic "oriental" themes.

Prom 69 : 6/9 Carl Orff Carmina Burana,  a piece that "needs" to be experienced live, whoever is doing it

Prom 72 :  9/11 Charles Ives  Symphony no 4 pioneering use of multiple orchestras and layering once considered unplayable, worth seeing as well as hearing

Last Night of The Proms : ideal if you like parties and dressing up ! I love watching on TV instead so I can see friends doing so. Even Kaufmann will be partying too
at May 14, 2015