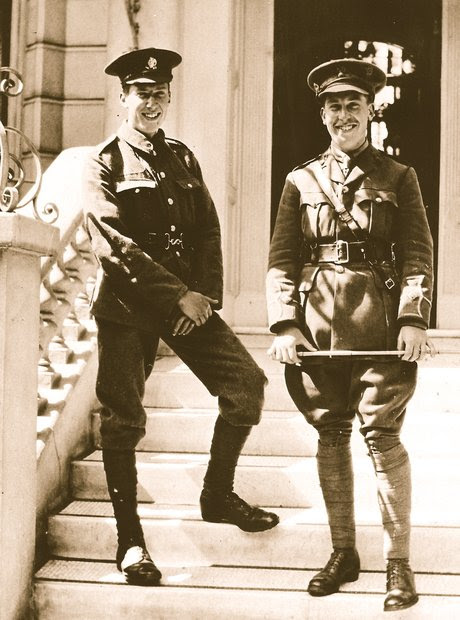 Berlioz and Bliss at the Barbican with Andrew Davis and the BBC SO.   Berlioz and Bliss, brothers in arms?  Stylistically, they could be on opposite ends of the spectrum.  Yet this programme worked because Andrew Davis drew a performance from his forces with such flair  that that the very contrasts enhanced the shine. That Andrew Davis should reveal the glories in Bliss is a given. He's one of the finest interpreters of British repertoire. But to reveal the depth in Bliss through the prism of Berlioz is quite some achievement.  Arthur Bliss's Morning Heroes (1930)  isn't completely neglected but performances are rare because it's hard to pull off a symphony on this scale. Much depends on the narrator, who has almost as much to do as the orchestra. Fortunately in Samuel West we had one of the best. Bliss uses a  variety of texts, giving each of the five movements a distinct character.
The title "Morning Heroes" comes from  the final movement where three different poems are quoted, Now, Trumpeter, For Thy Close (Robert Nichols), Spring Offensive (Wilfred Owen) and Dawn on the Somme (also Robert Nichols), which graphically describe the landscape of a battlefield, specifically the slaughter of the First World War in which Bliss and his brother Kennard (pictured together above) served. Kennard, like millions of others, East as well as West, perished. Morning Heroes isn't a requiem in the religious sense but describes the experience of war in a direct and unsentimental way. Thus the highest praise for Samuel West, whose down to earth narration captured the spirit of the piece without the histrionic theatricality of Brian Blessed, some years ago, whose performance verged on self indulgent self parody. War isn't a game, it's not "entertainment".   In these poems there's enough inherent drama to make a point without theatrical excess. West's dignified delivery made the words feel personal, and real.

Yet Morning Heroes starts with Berlioz's source, the Iliad. Perhaps it's not altogether significant that composer and hero shared the same name. though in LesTroyens the hero is Enée. Hector returning mainly as a ghost.  Perhaps for Bliss that held more meaning, for Morning Heroes refers to a mist, rising from the landscape, which is a metaphor for the souls of the dead. rising to heaven. The symphony begins with a long quotation describing Hector taking leave of Andromache, his wife. "Would you leave your children orphans, your wife a widow " the mood isn't quite as ebullient as the "Royal Hunt and Storm" from Les Troyens might suggest.  Enée and Didon have snatched a brief moment of love,  but duty calls.  The refrain in the chorus acts as a whip, goading Enée to sacrifice. Bliss follows this first movement with the turbulent The City Arming. Are the populace so caught up in bloodlust that they forget the human toll ?  The BBC SO Chorus certainly sounded whipped into frenzy.

The third movement, The Vigil, is based on Walt Whitman's  Vigil Strange I Kept of the Field One Night and his By the Bivouac's  Fitful Flame.  Whitman's verse isn't easy to set as its flow doesn't lend itself to music. Wisely,  Bliss uses spoken narration, augmented by chorus. Orchestrally, this is perhaps the most expressive moment. Davis and the BBC SO were in their element, the playing rousing yet dignified and finely detailed, an electrifying approach to Bliss, which respects the originality of his work, and the context of the postwar years, when so much was happening in music, from which those who died were cut off.  The brief return to the Iliad, which follows, is thus put into context, like a look back on values one might no longer share. When the final movement returns to graphic depictions of the Somme, the connection is made between wars long past and more recent. Andrew Davis's interpretation is strongly trenchant (perhaps the wrong term to use).  Bliss understood the reality of war better than most.

And so, full cycle back to Berlioz, too, confirming the wisdom of placing Bliss and Berlioz together, . the "Royal Hunt and Storm" from Les Troyens serving as an overture so flamboyant that it lit Morning Heroes up with its reflected glow.  In La Mort de Cléopâtre  Berlioz creates a 19th century vision of ancient Egypt painted in  purples and golds,  gloriously over the top, every moment drawn out for theatrical impact. Cleopatra is angry at being rejected – “la fille des Ptolémées” vents her rage in swelling, sonorous lines. Piercing string chords raise the tension, hinting also at the sharp sting of the asp. As the poison seeps through Cleopatra’s veins, the vocal line darkens and slows to funereal pace. “Osiris proscrit ma couronne”,  The soloist was Sarah Connolly.
at May 16, 2015