Elgar - Man behind the Mask 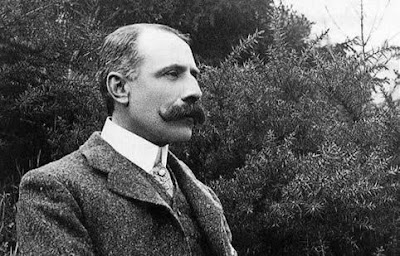 Watch the documentary Elgar, the Man behind the Mask on BBCTV 4. It's available online on demand for 10 more days.

From a musical point of view this film is excellent because the director John Bridcut relies for the most part on people who do know what they're talking about, such as Michael Kennedy, Jerrold Northrup Moore, Anthony Payne, David Owen Norris  and Sir Mark Elder. Good performance choices, especially the extracts from the Second Symphony and The Apostles. Please read Richard Landau's article in Classical Source. It's well written and very informative.

The myth of Elgar as regressive imperialist has long been demolished, but there are still many who think Boult and Beecham are the only valid interpreters. Until public perceptions catch up with performance practice there remains a need to restate the myth, if only to transpose it with the "new" Elgar, whose music is much more "modern" than assumed.

Nonetheless the need to make good TV leads to some overstated sensationalism. For example, the notorious "deathbed" photograph Elgar posed for while vigorously alive is in the film used as evidence that Elgar was obsessed by self-importance. In fact, he was making fun of the fashion for death masks and deathbed photography. It's quite the opposite of the pomposity and image-making he's accused of.In any case Elgar wasn't the first person to cultivate an image. If anything, it's easier today with attention deficit media.

Similarly, the gulf between social classes then was so extreme that Alice's love for Elgar was quite a scandal. She gave up much for love, and art has benefited ever since. Instead the film denigrates her, while simultaneously saying that Elgar was lazy and needed her to create.

When Elgar was knighted it was an enormous honour. The film however sneers at Elgar describing his occupation as "knight" (not all that unusual in those days). It implies that his daughter Carice's remark on the change of status must have been coached. But even a child would have been aware of class sensitivities. For all we know, Elgar and Alice might have joked about it, too. Bridcut refers to Elgar's "bamboozling technique" but standing on status is no big deal.  Since Bridcut makes so much of Elgar''s fundamental insecurity it shouldn't be any surprise that the composer wanted recognition. Try addressing Alan Sugar without the "Lord", for example. Men who've worked hard to get ahead are entitled to be defensive.

Just as Bridcut made much of Benjamin Britten's homosexuality, he makes much of Elgar being hetero. Of course Elgar loved women, but he didn't casually dishonour either Alice his wife or Alice "Windflower", his muse. Celebrities attract groupies. It's a fact of life.  Much is made in the film of a relationship Elgar had in his mid 70's with a younger woman who wrote a passionate love letter to him after his death. "Not revealed until now!" says the film, sensationally. Old men do act like boys, and we should be glad for anything that sparks up a great composer, but it's overstated and over-emphasized. Yet it makes good TV. As with all documentaries what was edited out or not filmed would be revealing. Nuance makes better history, but TV is usually (not always) a superficial medium.
at November 13, 2010

Email ThisBlogThis!Share to TwitterShare to FacebookShare to Pinterest
Labels: Elgar, music on film

The link is unbelievable. Perhaps even more so - if that be possible - is the writer's piece on Schubert...

I've kept a copy of this to pass on to a friend - another Elgar worshipper - for his comments.
Thank you for the huge amusement you have given me. I cannot get the blue panties bit out of my head.