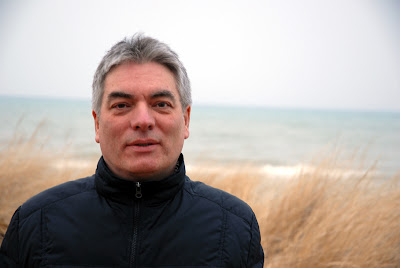 Centauromachy, a major new work by Simon Holt, premiered last night  conducted by François-Xavier Roth, and BBC NOW (National Orchestra of Wales)  It's substantial, five movements over 25 minutes, as ambitious as a symphony.  (Review of the Proms concert is HERE.)

Holt puts Clarinet with Flugelhorn in a double concerto. "It's surprising how two different "species", wind and brass can sound similar", he says. "Centaurs are a species of mythical creature that appear to have the torso of a man joined at the waist to the hind quarters of a horse at where the horse's head and neck would normally be. They are essentially fantastical beasts that combine, simultaneously, two distinct natures in one body. This may account for, on the one hand, their wisdom, making them intelligent teachers, whilst also making them impulsive and lustful, trapped in a kind of limbo between their two inherent natures: wild and yet capable of civilised behaviour."

Clarinet and Flugelhorn at first duet, establishing their individual character in repeating passages. Soaring calls, cross rhythms, each instrument restating the other's theme over a murmuring, dense orchestral background. A primeval forest, perhaps, setting the context. Duality extends in orchestral texture too, shifts between opaque layers and what Holt calls "still centres", moments of near silence, like clearings in a forest, or the way animals observe each other without making sound. Short snatches of very high pitch, fluttering eddies, ostinato like the stamping of hooves. 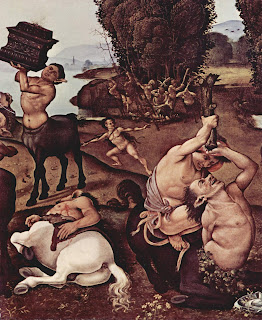 Holt describes the second movement as "dreaming". It's subdued, mysterious, yet alert. There's a steady rhythmic undercurrent, almost like breathing. Dreams perhaps, but not sleep.  Suddenly the music breaks forth again. Clarinet and flugelhorn acknowledge each other again in animated figures which leap and bound with energy. First clarinet plays with the orchestra, then flugelhorn, each establishing their own territory. Then they hocket. It's like a duel, each instrument grappling with the other for precedence. As Holt has said, "There was once a battle between the Centaurs and the Lapiths and this battle features in the fourth movement".

"Centaurs are well known for being heavy drinkers capable of violent and delinquent behaviour." said Holt. But there was one centaur, Chiron, who was intelligent and idealistic. He was an artist, teacher and healer who served mankind. Although half-beast and half-human, he proved his nobility by sacrificing himself to save Prometheus who defied the Gods and brought fire (ie light and civilization) to mortals. The finale is an  Elegeia for Chiron. It grows out of a long silence after the tumult of the fourth movement. It's austere and dignified, extreme stillness. Blaring flugelhorn reminds us of the Centaur's bestial nature, while clarinet (in A) creates soaring high pitches that rise upwards. As flugelhorn and clarinet combine, the music ends with a down to earth blip.

Wonderful, inspired playing by the BBC National Orchestra of Wales. Robert Plane played clarinet,  Philippe Schartz had a golden opportunity to display the richness of the flugelhorn. I haven't hear this orchestra in such excellent form in ages. They sound rejuvenated playing with vigour and crisp precision. Part of this may be the new conductor,  François-Xavier Roth, who is most certainly a "personality" in the best sense, charismatic and eclectic. Could BBC NOW emerge as the hippest orchestra in the BBC fold?  Simon Holt's Centauromachy gets most coverage because it's an important new work, but Roth and the orchestra showed just how good they are together in the rest of the programme. Albert Roussel's Bacchus et Ariadne, Suite No 2 (Monteux) shone, sounding decidedly modern. This performance of Sibelius Symphony No 2 was outstanding. It was tightly shaped and disciplined, so when the outbursts of freedom came they were exhilarating. After digesting Centauromachy, pay special attention to Roth's Sibelius. It's truly inspired, clear sighted and visionary. Wonderful !  Listen to the repeat broadcast HERE.