Why I love Merle Haggard 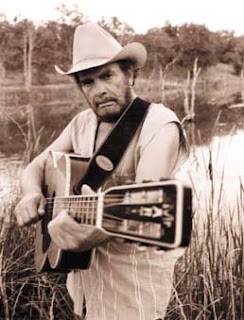 Why would a Lieder-loving Leftist like me love Merle Haggard, with his country twang, slide guitars and proto-fascist politics? Because in his own way, Merle Haggard's got integrity. He's an authentic Okie. His parents were refugees from the Dust Bowl in Depression Oklahoma. Merle was a roughneck, alcoholic and ex con but he's not dumbass. He turned his life round and became a creative artist who thinks about issues. "I'm proud to be an Okie from Muskogee, the place where even squares can have a ball".

His politics were ultra right and anti intellectual. Macro, such things are destructive but for him they're an articulation of someone who's lived as he has. Bizarrely, we agree on crippled soldiers (see Hanns  Eisler's Ballade von der Krüppelgarde): he blames flag burners and I blame the crooks who send men to war in the first place. (Though to his credit he opposed the invasion of Iraq.).I'll defend his right to his views if he'll respect mine. Probably not, but I think the guy's sincere. As working class hero, he's kin to Bruce Springsteen, though their politics aren't the same.

And the music. He's not as good as my favourites like Jimmy Rogers, Roy Acuff, the Carters and the Louvin Brothers and others from much more innocent times past but he's sure more authentic than the sort of plasticized trash that came after. I discovered him during the Vietnam war and he led me to them. Here is a link to a wonderful version of Today I started loving you again, which he wrote for Bonnie Owens, his second wife. A million miles from Schubert and Wolf, and the voice is nowhere near bel canto, but the tenderness is genuine. And listen to the alienation  in the clip below: