A Dog's Heart - the movie 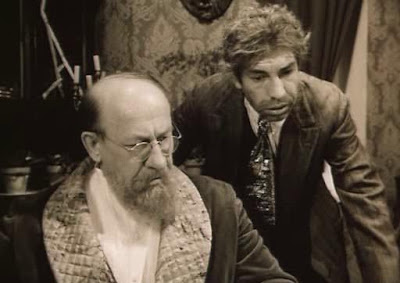 Brand-new opera A Dog's Heart starts at the ENO on 20th. Please see my preview HERE. The opera is based on a novel by Mikhail Bulgakov, written only 8 years after the Russian Revolution. It was a time of surprising liberality because the new order didn't, as yet, clamp down on new ideas in society, literature, film, etc. Nonetheless Bulgakov's The Heart of A Dog was so seditious it went underground until officially unbanned in 1987. Perhaps it says something about the Soviet Union that the novel was filmed the very next year for Lenfilms, Moscow, directed by Vladimir Bortko. 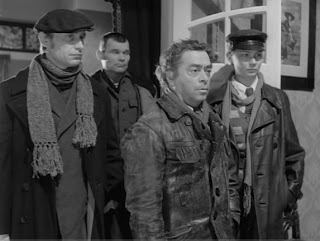 Atmospherically shot in sepia, like an antique print, it grounds the drama in 1925, discreetly bypassing the universal relevance. It's a good starting point though, because so much of the film depends on understanding the background. A snow-covered street, shot from ground level. Gradually voice emerges - the thoughts of the dog, which is why the shots are dog-level. Everyone's scavenging in these desperate times, "dog eat dog" you could quip.

Professor Preobrazhensky is an eminent surgeon, who lives in an old Tsarist mansion, now gradually being taken over by squatters authorized  by the new authorities. They pull up the parquet for firewood, the electricity's unreliable, everything's slowly falling apart. The Professor dines in elegant surroundings and still has the clout to ward off Shvonder and his Management Committee who represent the new order. The Professor adopts the dog and feeds him kielbasa. The Professor's speciality is interspecies transplant which was actually popular pseudoscience in the 1920's - monkey glands as viagra for example. Rejuvenation by extreme measures - a metaphor for the grand Soviet Experiment. 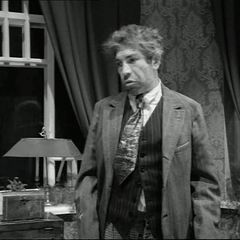 But you can't take the dog out of the man. Post-surgery Sharik gets poshed up as Poligraf Poligrafovich Sharikov. The name means "polygraph" a nonsense name chosen by a dog asserting his identity. He wrecks the house, tries to rape the maid, generally runs amok till he takes up with Shvonder and his gang of bullies. Then he gets a job in pest control. "You're so good at rounding up stray cats", say his mates. "It's in my heart", says Sharikov. Now that Sharokov has power and is armed with a gun, he's dangerous.  Not because he is pals with Shvonder. "The real horror is that he now has a man's heart, not a dog's,", says the Professor, "the rottenest heart in all creation".

Bortko's Heart of a Dog is full of quirky period details that will have Russians howling with delight. But it's a wonderful film anyone with wit can enjoy if you like subversive satire. The actor who plays the dog even looks jowly, like a mutt. At the ENO, A Dog's Heart is an entirely new work, scored by Alexander Raskatov and dramatized by Simon McBurney, both of them new to opera, though McBurney's work with Complicite, the innovative theatre ensemble, is legendary. The film is excellent background, but go to the Coliseum expecting something completely different to the film. Who knows what this latest transformation  might be?
at November 19, 2010