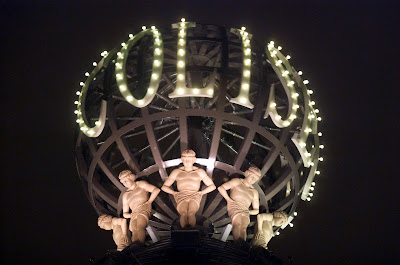 Last minute cheap deals are great, but if we really care about opera, it's obvious that in the long term, cheap deals aren't good business. They're great for filling an empty house and bringing in new audiences but if we want houses to thrive, we've got to do our bit, too. Public booking opened yesterday at the ENO but we've become so used to last minute deals that lots of seats are still available. My gut instinct is, don't wait for the bubble to burst.

Two important new joint productions. In May, Berlioz the Damnation of Faust. Terry Gilliam directs which may or may not be good, but it's a joint production with De Vlaamse Opera in Antwerp, In June, a co-production with Bayerische Staatsoper, Munich, of Verdi Simon Boccanegra. Bruno Caproni and Brindley Sherratt - should be good. Interesting that these will be in English, since they probably aren't in Belgium and Germany. Joint productions spread costs more evenly and mean good work gets seen by more, and opera becomes less insular.  There never was a rule that houses couldn't import. Thank goodness, as joint productions are the future.

Parsifal, starting 16th Feb is going to be a big draw even though it's in English and a revival. John Tomlinson, Iréne Theorin and Stuart Skelton. Maybe not ideal, but any Parsifal is an event.

Another goodie might be Benjamin Britten's  A Midsummers Nights Dream. May-June is the right time of year for this dreamy piece and Christopher Alden might do magic. If he can top the Garsington production in 2009 or the Linbury in 2007, wel done. Iestyn Davies alone will do magic for me, but with Willard White as Bottom, this should be a treat. Sellout for sure, if audiences have any sense.

Donizetti's Lucretia Borgia starts 31st January in a new production. This might be good as the story's strong and the director's Mike Figgis from the movies. "Radical new staging" of Monteverdi's Return of Ulysses at the Young Vic in March should be fun as Monteverdi does lend himself to startling effects. Small house, tickets move fast, be warned. I'm less wild about Nico Muhly's Two Boys in June /July. It's not the subject matter - Romeo et Juliette is teenage sucide too. Muhly's so trendy he squeaks. His music's self conciously popular, designed to sell. This summer he was part of a massive publicity campaign in UK. I heard one piece three times, which has probably inoculated me from ever catching it.

This year the buzz will be Les Saisons Russe du XXI siècle. Three separate programmes recreating Diaghilev originals. The first recreates Le Dieu bleu  and the Firebird - wow! The second Thamar and Sheherazade - spectacular. The third, L'Après-midi d'un faune and Le pavilion d'Armide. These were Nijinsky classics but the dancers are Russian, so should be good.
at November 02, 2010