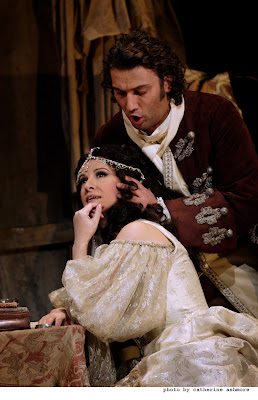 Francesco Cilea's Adriana Lecouvreur at the Royal Opera House London, by Ruth Elleson in Opera Today. Read this, it's an example of what good reviewing can be - analytical, thoughtful, and above all, processed by a human mind ! If you like perceptive writing you know where to find it. You can see why I was waiting for this.

"the sheer number of references to other shows — maybe a natural progression from the score itself. Cilea was a contemporary of Puccini and Massenet, and most of the aural reminders are from this milieu, but Act 4 in particular evokes a wider range of influences. In McVicar’s staging, a balletomane friend of mine who attended the dress rehearsal picked up on direct references (costumes and choreographic devices) within the Act 3 ballet to Royal Ballet productions of La fille mal gardée, Invitus Invitam and Sylvia. The chorus crowded into their onstage audience-seating much as they did in McVicar’s Alcina for ENO in 1999; then, a marble bust of Handel dominated the stage; here the bust was Moliere’s. It was interesting that of all his own works, this was the one McVicar chose to reference; another opera about the blurred boundary between theatre and reality."

"......Gheorghiu may not be an immediately obvious ‘humble handmaid of art’ but she was poised and charming, playing a very youthful version of this heroine who historically has been associated with the ageing diva. Her voice is very much on the small side given the scoring, and for the intimacy of the first and last acts (which frame Adriana’s two celebrated arias) it was often exquisite. But in the confrontation with the Princesse de Bouillon and again in her vengeful Phèdre monologue, Gheorghiu was a kitten when a tigress was needed"

"Jonas Kaufmann always seemed on the edge of something spectacular, and the contained restraint with which he treats his large, dark-coloured voice would have been massively exciting had it been part of a broad palette. As it was, he seemed to be trying to demonstrate that a hot-blooded verismo hero can be sung with subtlety and intelligence, while also showing off some of his remarkable technical skill (particularly in his legato, and once, memorably, his impeccable ability to diminuendo on a top note). It was very, very impressive — but all too careful, too measured. It seemed a studied effort in avoiding stereotype (or perhaps he was reining himself in to avoid overpowering Gheorghiu) but I longed for him to let rip."

Please follow the link here  for more - it's worth reading, this is the voice of experience, not just another writeup. No-one else gets the references to other works. Scroll down or go HERE to see my review with more photos.
Photo of Angela Gheorhiu and Jonas Kaufmann copyright Catherine Ashmore, courtesy Royal Opera House, details embedded.
at November 24, 2010

But the Molière bust is in the libretto! "Nel mezzo, in fondo, caminetto adorno del busto di Molière."

And the audience seating thing goes waaaaay back, at least to Wieland Wagner's Lohengrin (and then it showed up in Hans Neuenfels's Aida) but probably further.

What a dream cast for a dreamy, underrated opera! I'll forever have Renata Tebaldi's voice in my ear when it comes to the heavenly music from this opera, but I can very well imagine Gheorghiu doing a great job. And Jonas Kaufmann! Saw him here in Stuttgart before he was famous, and for his looks alone he'd have been worth the price of the ticket, but he also had the good sense to sing well, too.
Thanks for posting; I hadn't heard these two were doing Adriana together.
Best,
Michael