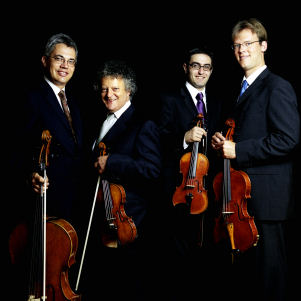 Tuesday, like Monday, saw the performance in Edinburgh of work created by a polymath, this time the Greek architect and composer Yannis Xenakis, whose mathematically derived boundary-pushing work  started to be created under the tuition of Messiaen. One of the interesting aspect's of the very enjoyable Messiaen anniversary year was the chance to see the very considerable diversity of subsequent-generation composers who benefited from his tutelage in developing their divergent styles.

The work of Xenakis is extraordinary, challenging to listen to but from which I emerged strangely energized. For me it was the highlight of the  performance. Two of his works were presented. Ikhoor, named after the life-giving fluid flowing through the Greek Gods used in place of blood (blood cells and their behaviour being a subject which had fascinated the composer), is a string trio with an urgent insistent drive, full of buzzing sounds which create the impression of a swarm of bees. The cleverly contrasting ending involves the previously intense sound fading to a whisper, then creating the effect of echo. Tetras ('Four') was inspired by the composer's experience of working with this ensemble. As Messiaen describes it, 'The sound is a delicately poetic or violently brutal agitation.'

Like the previous day's performance, the Arditti Quartet recital at the Queens Hall  featured both high-quality performance of established repertoire (here Janáček's pleasing “Kreutzer Sonata”  string quartet number one) and innovative contemporary works. Perhaps more than any other ensemble, the Ardittis emphasis working with and alongside composers as they develop the works they commission.

This performance featured the fruits of not one but two such collaborations; not only the work with Xenakis, but also two string quartets from  the American Conlon Nancarrow, best know for composing a large number of works for player piano. Two of these were arranged here for live musicians, and these were presented  after the performance of two string quartets from him, the second of which was created for the Ardittis after hearing their own performance of the first. These two quartets were separated in the composer's output by another, never finished but referred to as his 'second' string quartet, so that the two performed here are known as the first and third.

The Third Nancarrow Quartet, which formed the second item in the second half of the Edinburgh concert, was a real revelation, being much of the time very delicate and almost melodic in its sound world, referencing at times the melancholic longing of the opening Janacek. Its first movement closed with an extended cello solo, excellently performed here by Lucas Fels – who was consistently good. The baton is then passed to the first violin, which has another extended, this time largely pizzicato, solo, with occasional accompaniment from the second violin, which occupies most of the second movement. The technically demanding and rhythmically unusual closing movement uses all four voices to come to a surprising ending.

The Ardittis performed excellently in a very varied and challenging mixture of repertoire. Broadcast live on BBC Radio Three, the performance remain listenable via the BBC website for another six days.
at August 29, 2013