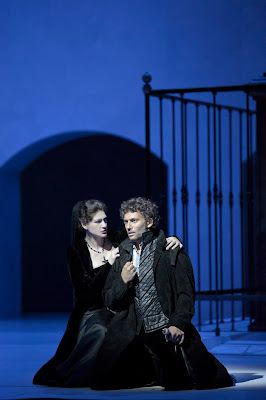 Verdi Don Carlo live from Salzburg. Vocally, it's ace. With a cast like this, it couldn't be otherwise. Visually, it's  much better than you'd guess from some sections of the press. "Sumptuous emptiness"? Only in the eye of the beholder. Peter Stein's production focuses on the underlying drama, allowing the music and singing to tell the story. Stein is now nearly 80, but his background was  cutting-edge theatre, and he's musically aware. So there's no way this Don Carlo would be retro banality. Sure, the costumes are "historic" but the way they're used is part of the overall concept. Like the drama, the set is stark and unyielding, like the situation Don Carlo and Elisabetta are up against. The costumes serve as contrast, making the point that luxurious trappings conceal barbaric cruelty. Glory and power are nothing if they result in mindless killing. The sumptuous colours here are in the lighting. They are illusion, just as in the drama. Verdi's anti-clericalism is in some ways even more radical than Schiller's original text. Anyone who thinks Don Carlo is costume drama needs to pay attention. Tu che la vanità conoscesti del mondo e godi nell'avel il riposo profond
etc etc, as Verdi makes perfectly clear. 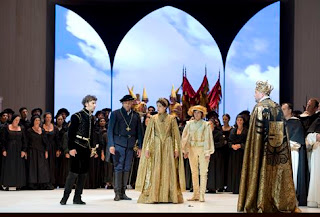 Jonas Kaufmann and Anja Harteros sang  the leads as they did a few weeks ago at the Royal Opera House in London, (reviewed here) but the contrast between the Salzburg and London productions could hardly be greater. Nicholas Hytner's production decorated the stage with silly Legoland images, trivializing the opera. So grotesque was the auto-da-fé scene that one might assume Hytner thought being burned at the stake was fancy floorshow. Stein's staging emphasizes the fundamental conflict. Church and State are depicted in sinister darkness, the monks dehumanized and robotic. Those who are to be burned alive are seen in extreme light, skies and clouds behind them. On film (very well directed) you can see details like bloodstains which probably weren't visible on the wide stage at Salzburg.

In the final confrontation in the tomb of Charles V, Stein again emphasizes the unyielding coldness of stone, formality and death. Hytner's tomb was comic book with the words "CARLO" on the side so you wouldn't miss them. Like the Commendatore in Don Giovanni, the Old King drags the Young Prince into the grave. Hytner's approach is embarrassing. Stein, instead, shows a sinister figure slowly emerge, embracing his grandson. It's altogether more subtle and complex. Kaufmann expresses a range of emotions and smiles as he dies. Stein knew what Charles V represented in the Counter-Reformation, and also what generational power struggles represent in Verdi. If you want intellectual and musically informed, go for Stein at Salzburg, any day.

Kaufmann sang even better at Salzburg than he did in London. "Fontainebleau! Foresta immensa e solitaria!" he sings, immediately showing what the freedom of the forest means to the cloistered Prince. He commands the stage with energy and authority: no wonder Elisabetta falls in love. She's dressed in a truly hideous costume which looks like an accident in the curtain section of a thrift shop. At first I groaned, but seeing her elegantly dressed in later scenes, I wondered if the designer was trying to say something?  Elisabetta's tragedy happened because her father placed politics above love. She and Don Carlo have lots in common.

Harteros was impressive because she is good and very experienced in the role. Kaufmann dominated this time for the most part, but Harteros truly came into her own as she showed how Elisabetta develops as a personality during the course of the opera. In her private confrontation with Phillip II, her voice shows how the young Queen is becoming a mature adult. In the final tomb scene, Harteros characterizes with such depth and power that you hardly dare breathe and lose the moment.  Harteros's majesty comes from the strength of her portrayal. As she finds resolution, youthful freshness returns to her voice. It's as if she's being reborn, purged by suffering. 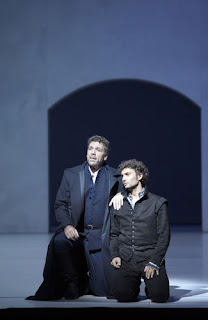 Thomas Hampson's Rodrigo, Marchese di Posa, was outstanding for much the same reason. Hampson's Rodrigo is fully-fleshed in personality, the edges that are creeping into his voice used intelligently to enhance portrayal. Hampson's Rodrigo is a strong father figure, a counterbalance to Philip II, even perhaps a ghost of Charles V. This is a characterization to be reckoned with, immensely enhancing the meaning of the opera.

Ekaterina Semenchuk's Princess Eboli also extended the role from relative sideline. In real life, as far as we know, the princess was ugly and blind, so the plot is rather cruel. Semenchuk, however, is beautiful in a fulsome way, and as elegant as the Queen, but the warmth in Semenchuks's timbre adds an interesting twist. She creates Eboli as a sympathetic person, driven to extremes by the frustrations of her place at court. She's a parallel Elisabeth, just as Hampson is a parallel Philip II. Singing of this exceptional quality brings out levels of exceptional interpretation. At Salzburg the singers were admirably supported by Antonio Pappano's impassioned, vivid conducting, inspiring the Wiener Philharmoniker to the high standards they should always aspire to. Like Stein's staging, Pappano's approach highlights the inner tension in the drama, with its interplay of luxurious excess and ascetic self-denial.

In real life, Philip II wasn't the villain he's depicted as in English history books. Like Charles V, who retired to a monastery and gave up ruling the world, Philip II wasn't fooled by the trappings of power. In his own way, curiously, he was a man of the counter-Reformation though he was too devout to lose faith. He chose a kind of "inner exile", letting the Church have its way for political reasons. In London, Ferrucio Furlanetto was outstanding. In Salzburg, Matti Salminen was less effective, though adequate.  He's only four years older than Furlanetto, but his voice isn't what it was in his glory days.  But then, neither  was Philip II. HERE is a link to the broadcast.and HERE is a link to my review of Stefan Herheim's perceptive Wagner Die Meistersinger von Nurnberg.
at August 18, 2013