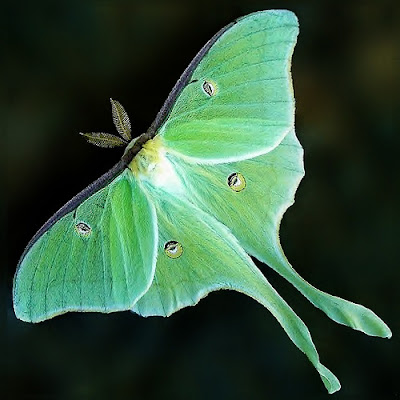 Harrison Birtwistle Moth Requiem premiered at BBC Chamber Prom 5 with Nicolas Kok, members of the Nash Ensemble and the BBC Singers. It's a strange, mysterious piece which soars, floats and suddenly darts: very much like the movement of a moth. Long ago, when Birtwistle was writing pieces like Earth Dances, his music felt organic, in the sense that it suggested geological formations, perhaps even the vast shifting forces of tectonic plates. Moth Requiem is altogether more...well, gossamer and transparent. Female voices chant the latin names of various types of moth. High, piercing flute, harps  plucked lithely. Sometimes the voice parts fragment, creating feelings of flight and fragility. I can't detect structure, but who cares? This is so atmospheric I'm happy to waft in 20 minutes of magical reverie.

Moth Requiem is based on The Moth Poem by Robin Blaser, librettist for Birtwistle’s opera The Last Supper, in which the poet traced eerie night-time sounds in his house to a moth caught under the lid of a piano, touching the strings in its efforts to escape. The work, scored for twelve female singers, three harps and alto flute, has been recorded for the Signum label and receives a further performance at the Wigmore Hall in April 2014.

Why moths?  Unlike butterflies, moths come out at night. They're attracted to light, but often it kills them. The photo above is the Chinese Luna Moth (Actias dubernardi). In real life, the colour is even more intense and unnatural.  When I was a little kid, I found one in the garden. Many decades have passed but the memory is still vivid. Luna moths are huge (about 5 inches across) but they're fragile, dying after just a few days. All that brilliance, for what purpose? Listening to Birtwistle's Moth Requiem, I thought about the moth as metaphor..

At the age of 80, Birtwistle's powers are undiminished.  Thirteen of his works were featured at the Salzburg Festival, including Gawain (reviewed here by Mark Berry)  which will be coming (unstaged) to the Barbican in May 2014. Next week, in Lucerne, his recent In Broken Images (based on a poem by Robert Graves) will be heard. At Aldeburgh is June, Songs from the same Earth, a new song cycle on texts by David Harsent, received its premiere with Mark Padmore and Till Fellner.
at August 12, 2013