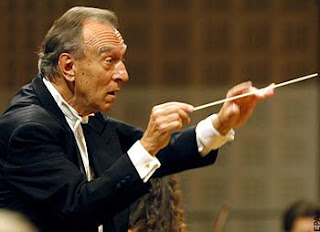 "I am Claudio to everyone." Claudio Abbado told the Berliner Philharmoniker when he became their Chief Conductor in 1989. The contrast with Herbert von Karajan could not greater. It was the sign of a new era which has transformed not only the orchestra but much of the current European orchestral ethos. In an unprecedented tribute to Abbado's vision, the Berliner Philharmoniker is releasing a huge archive of Abbado concerts in its Digital Concert Hall.

What treasures! A complete cycle of Beethoven Symphonies, chosen from a huge selection of concerts over the years. The May Day Concert from 1991 in Prague - part of the Berliner Philharmoniker's tradition of performing in historic European cities. New Year's Eve concerts, Japan tours, and Paul Smaczny's documentary, The Silence that Follows, not new but a classic in the art of music documentary. Mozart, Verdi, Brahms, Mendelssohn (a particularly fine Lobesgesang), fabulous soloists. The series is a wonderful record of how the Berliner Philharmoniker has developed over the years. Abbado, the Berliners and other institutions and conductors associated with them, like the Lucerne Festival and the Gustav Mahler Jugendorchester, are the crest of a whole resurgence of creative music-making. What is the future of classical music? I hope it lies with ultra high standards and professionalism.  Follow this link here to the Berliner Philharmoniker Digital Concert Hall series on "The Abbado Era".
at August 24, 2011