Georges Aperghis - Storm beneath a Skull 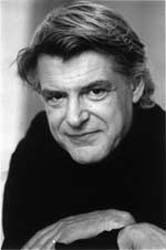 This afternoon Georges Aperghis's Champ-Contrechamp is premiered at the Proms (BBC Prom Saturday matinee, Cadogan Hall) along with premieres by Harrison Birtwistle and Peter Maxwell-Davies. Interesting that Aperghis should separate those two! Mischief and anarchy, Aperghis's thing, but with purpose.

Here's a review of  a useful and FUN DVD. "....Aperghis is a “polyphonist”, says a musician, who writes “a bouquet of voices converging or not, which overlay or connect … each voice adds a little thread which requires great rhythmic precision, because if one is not totally tuned in, it unravels”. This is music that happens in “realtime” as they say, because its sheer simplicity calls for exquisitely sensitive playing. A cellist and a zarb player - it’s an African drum, beaten by hand - demonstrate......the two are so well integrated that it’s hard, on first hearing, to remember how basic the zarb is technically." "....Lionel Peintre, the tenor for whom Aperghis has written so much says that the piece wasn’t a composition “but a kind of living being that lashed out at me, the wildest animal I ‘d ever had to face, and quite a nasty one, too.”

There are excerpts from the opera Avis de Tempête (2004). A storm unleashes the wildest forces of nature. It’s dangerous and unpredictable, torrents of rain, followed by thunder, wind and crashes of lightning. A storm, says Aperghis, symbolises “the loss of logic or construction as decided by human forces”.

There's also a complete film where Aperghis recreates the fairy tale Little Red Riding Hood as if it were a story within a story. ”A group of musicians climbed into a box” goes the voice-over, in order to create the story. “For all we know, they are in that box still” it adds. “If they are alive at all!” This sums up a lot of the ethos of Aperghis’s work. The composer isn’t the only auteur. It’s almost a joint effort, reborn with each performance. Thus the lines blur between those wearing red hoods and those wearing wolf masks. Sometimes the little red hat “dances” by itself. Of course it’s invisibly manipulated by someone holding a stick while hidden behind the piano, but while we watch, spellbound by the mysteries of this ancient tale, we no longer need logic or causation. As the moral of the story makes clear, how stupid can a girl be, to get into bed with a wolf and not expect to get eaten?"
at August 20, 2011