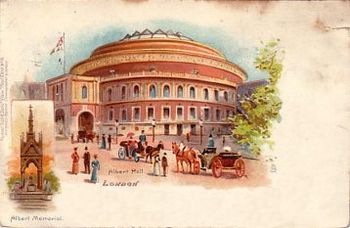 FANTASTIC Prom ! Review is HERE with many extra links !  Please bookmark and revisit. In 2009, to celebrate Mendelssohn's anniversary, the BBC Proms did all his symphonies and some other works but not the biggie : Elijah. Or Paulus (which I love). The Three Choirs Festival did Elijah that year so I guess it was too much of a good thing. But when the Proms do something well, they do it ultra well. Week after week of massed choir blockbusters this year, making the most of the opportunities afforded by the Royal Albert Hall and its magnificent organ, the biggest and boomiest in the country. In times of economic and moral meltdown, we need extravagances, because they lift the soul. Besides, these blockbusters honour a grand British traditio : choral singing. One of the pleasures of getting to the Proms early is that you get to see the choristers lined up waiting to go backstage, and afterwards, they mill out among the crowd, still high form having sung their lungs out. In Victorian times, the burgeoning British middle class just loved massive displays. Look at the Albert Memorial, The Royal Albert Hall, the V&A, the Royal Parks. There are accounts of Elijah performances with 10,000 voices, though it's hard to imagine keeping them all together. At least they wouldn't have needed amplification. The excess is ironic, given the nature of the story - Elijah in the desert, the populace starving. Wild man Elijah rejects gods of luxury for an uncompromising God, and gets carried off to heaven in a fiery chariot. But goodness, it's fun!
Sorry I am a bit late with review but in the meantime you might like Elgar Caractacus Three Choirs, Handel Terrorist Samson Prom, Handel Messiah Prom (youth choirs)  Please use search box.
at August 28, 2011