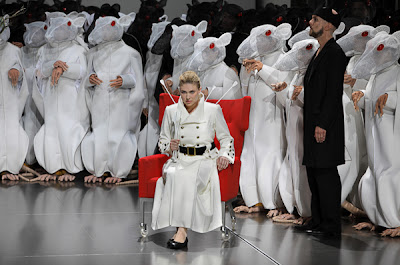 Many will run, shrieking like rats from a sinking ship when they see this production of Wagner 's Lohengrin from Bayreuth, the famous Neuenfels Rats production. But steel your nerves and watch in online on demand from Siemens AG (link HERE) until 30th August. View more than once, there's a lot to take in. It's an experience that makes you appreciate just how radically original Wagner can be. Shocking as it is, this production is created with insight. Those who prefer kitsch to Wagner can leave the ship for those who care about Wagner as a thinker on an audacious scale.

Take Wagner literally and you're the fool. The real King Heinrich defeated the hordes from the East in 933 CE.  By which time Brabant had been firmly Christian for 500 years. Ortrud would not have been a strategic match for Telramund. She'd have been burnt at the stake. Then Lohengrin appears, conjured up by Elsa's dream. Ortrud's right: Elsa should know who she's marrying. Lohengrin reveals he's the son of Parsifal and comes from a strange cult at Monsalvat, where they talk Christ but practise blasphemy. Lohengrin's name is the least of the questions she should be asking.

And who are these Brabanters whom everyone wants to protect? Usually they're depicted as irrelevant ormnamental background. Here they're rats, in ingenious costumes. They hold their bodies like rats, and twitch. They move in massed groups like rats do. Yet they have individual personalities, like humans. They're even cute! Suddenly, the focus is on the Brabanters themselves, rather than  those who decide what they should do. Because the Brabanters now have identities, the whole scope of the opera opens out. One is reminded of Wagner's proto-socialist beliefs and his disdain for mindless authority.

When the rats are manipulated by Telramund they can turn vicious, which is why Elsa appears, borne down with arrows stuck in her back. It's a horrifying image, but Elsa's been shafted from all sides. That Annette Dasch is a tall, strong woman makes it even more poignant. Yet the rats are fundamentally creatures of nature who do what they think they need to survive. When they're not threatened they're quite delightful.  They have hideous claws and feet, but caress each other with great tenderness, as rats do. In their nobler moments, they remove their hoods and reveal their human faces. There's a lot of humour in Neuenfels's production. The Brabanters could be prototype Nuremburgers. But rats don't think and easily descend into mobs. Note how the rats in uniform resemble the SS. Petra Lang's Ortrud is got up vaguely like a camp guard. When she flashes her teeth, they shine sharp and white, lika a rat. When she kisses Telramund, it looks like she's savaging him.

Why rats? The idea is not nearly as far fetched as Lohengrin's connection with a swan. The Christian image is a dove, a symbol of peace. Swans look serene, but are aggressive, clumsy and attack in mobs. So why does Monsalvat revere swans? Bigger isn't necessarily better. When Elsa appears as a bride, she's dressed like a swan, hiding her face behind a feather fan, but look at her hair. It's hidden behind a helmet-like cowl, with a point like a widow's peak. Both sides of a swan's nature. Ortrud appears as a black swan, but can't get it right, like jealous people who try to imitate those more talented than themselves. Poor Petra Lang, painted like a mad doll, with 7cm false eyelashes.

When Lohengrin and Elsa are at last alone for the first time, they appear in simple garments that don't inhibit movement. It's actually in the libretto. Now they're neither swan nor rat, but fully human. The action here is as eloquent as the singing. Klaus Florian Vogt, who's sung more Lohengrins than most, reveals the hero as profoundly a sensitive and vulnerable. His singing is divine, (thrill to it) but watch his face, which projects genuine love and concern. Lohengrin is an almost supernatural hero, but he can't control things in his own bridal chamber. This is a very  moving interpretation, which gives Lohengrin much greater depth of personality. When he and Dasch grapple, the physical charge is palpable. And they're barefoot, like rats, only more beautiful to us, as humans.

There are many references in Neuenfels's production to other Wagner ideas. King Heinrich refuses to wear a sword til the truth is established. He plunges it into a potted tree in the middle of the stage - Wotan plunging his sword into the World Ash Tree. An ordinary king could decide Elsa's fate on the spot. Perhaps Heinrich realizes that this is cosmic, not a civil dispute. Georg Zeppenfeld doesn't do Heinrich as despot, but as thoughtful, unarmed human being. The female wedding guests appear in luminous colours and floral hats - the Flower Maidens from Parsifal, a warning that the hero must resist temptation?

Then the full horror of what Lohengrin reveals. Read the libretto carefully, for it's a discussion about a year's gestation and the freeing of the swan from its thrall to the Grail, and the return of dead Gottfried. So maybe it's not so far fetched after all that the swan boat turns into an egg, from which a foetus emerges, fully-formed, decisively tearing up its umbilical cord. It's Gottfried, reborn, his glänzendem Silbergewande not an artificial armour but natural, silvery vernix, which protects newborns from infection. Bizarre as this sight may be, it's implicit in the text and no crazier than the whole Parsifal myth. Indeed, it takes the myth to its conclusion, as Monsalvat is now refreshed through Virgin Birth and Resurrection.

The art of filming opera is also in its infancy. Since most operas now come in film form, Bildregie is becoming more important than ever and shouldn't be left to the point-and-shoot brigade. Bildregie as musically sensitive as in this broadcast should be studied carefully as it's a lot more than what happens on stage. The overtures begin in the Festspielhaus itself. Act One starts with Vogt's Lohengrin trying to unlock a door, which opens when he ceases to search. We descend into the world of Ortrud and Telramund through the bowels of backstage, and underground machinery. From high up in the ceiling, we see the nobles of Brabant gathering in colourful formation. Then when they go into battle, we see them girding up in their armour (rat suits).  Gloriously wonderful music, admirably conducted by Andris Nelsons, warmed by the blending of drama and reality.

Many will howl that there's no place for humour in Wagner, but that might not be true. Neuenfels uses rats to infuse this production with genuine humanity, which favours non-violent understanding, not brutal totalitariansim.  Wagner is myth on a grand scale. Literal representation distorts the real imagination in his work. So the humour here reaches parts the others don't go near.Yet again, proof that in wit there is wisdom.

Lots more on this site on Wagner, Lohengrin, stagecraft and the art of filming opera.
at August 15, 2011