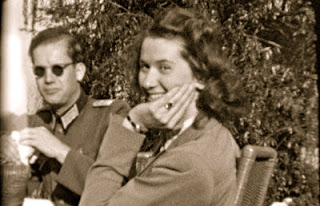 Two remarkable films about living under the Nazis on BBC4 TV. First Surviving Hitler: a Love Story . This is big news, as it's making its first high profile appearance in Britain. So far it's only been screened in festivals and small houses. The DVD will be released in December. Second, My father was a Nazi Commandant. Watch them both for a week on this link and this one.

Surviving Hitler: a love story is so amazing, it's almost hard to believe. The people involved were camera fanatics and recorded every detail of their daily lives. It's an almost unequalled archive, a valuable resource for historians of all kinds. But most amazing of all is what the family went through. All of them arrested for being involved with Operation Valkyrie, to assassinate Hitler. And all miraculously survived.

Tall, "Aryan" Jutta discovers that her maternal grandparents were converted Jews, and is sent to Switzerland for safety. But she returns to Berlin where she can't work, study or marry. Luckily she's rich and moves in influential circles. She meets Helmuth Cordes, a man who seems permanently attached to a camera, whether he's taking stills or moving film. The family is close friends with Werner von Haeften, adjutant to Claus von Stauffenberg, who planted the bomb that should have killed Hitler. They attend "tea party" groups  that denounce Hitler (Moltke?) and sheltered one of the plotters in their mansion.  Come July 20th 1944, the assassination fails and von Stauffenberg and von Haeften are murdered. Jutta's father is imprisoned and her mother sent to Ravensbruck, Helmut, who had a very junior position in Haeften's staff, is arrested too. Officially around 5000 people were executed in the bloodbath that followed. Others just disappeared. Jutta hides for a while then walks into Gestapo HQ and is promptly arrested. Eventually, the Russians roll into Berlin and Jutta, freed, goes home. In walks her mother, who's also been freed, and then father and Helmut as well. So they take out their cameras and record their wedding, the first in liberated Berlin.

Surviving Hitler: a love story is an extremely well crafted documentary. There must be thousands of photographs, for the story can be told through real pictures, carefully matched to fit the narrative, even thoughn the pictures may have been taken at different times.  Only one talking head, Jutta herself, who is eloquent and has such force of personality that she'd be worth watching even without the amazing story and archive. The family shots are augmented by contemporary film clips, including rare film of Hitler in colour. Where there's no original material, the film makers resort to re-enactments and footage from old movies, but these are incorporated so well that they blend in perfectly. This film has none of the tacky cut and paste feel many other documentaries suffer from. And the film makers are so self effacing, you can't find them on their website ! Truly a remarkable movie, beautifully made. This should be screened everywhere, including film making classes.

As film, My Father was a  Nazi Commandant (2006) isn't nearly as well made, but it's about Monika, the daughter of Amon Goeth, commander of the work camp at Plaszow near Krakow, and her quest to make amends by contacting Helen, who was a slave in Goeth's luxurious dwelling.  Monika was brought up in ignorance, not understanding why her mother was a cold hearted bitch.  Helen tells her everything, and how the father was an evil killer who took pleasure in destroying thousands of lives. Helen's husband killed himself in 1980, haunted by memories. For Helen, making this film was a kind of closure because now her testimony is in the public domain. Monika is traumatized. It wasn't her fault, but she's devastated, practically hysterical throughout. "Your suffering is just beginning" says Helen. As documentary, this film feels very edited, so you wonder what really went on behind the scenes, and how the participants were treated. But Monika and Helen's feelings are so raw that it's a disturbing, emotionally draining experience. Monika, too, is a victim of the sadist who engendered her, and she's worthy of respect. She's a courageous woman, so I hope the trauma of making this film hasn't wrecked her.

Making documentaries like these isn't easy. Sometimes you wonder at what human cost is "good TV" created. But they need to be watched, to remind us that totalitarianism is never harmless or acceptable.
at August 17, 2011

wow, thanks for posting. It was rare back then for people to film their lives. Wasn't like today's age of bloggers and youtubers.

You're right, people don't changer, they just get different toys !

bummer, those links are only good for in the UK. Looks like I'm gonna have to arrange a Pittsburgh screening.

Great idea ! Good for you ! You will reach many who would never watch BBC (something to do with licensing rights) Some of the proceeds go to an educational charity too.

I'm concocting a crazy plan to have the screening put on by a local opera theater (we'll see if they go for it). That way not only do these important films get out, but it could also serve to introduce new people to the work the opera theater does. It's a nutty idea, but you gotta think big to get big :)