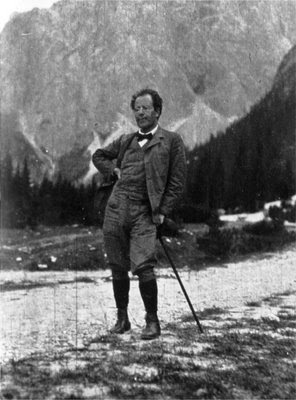 Of all the Mahler Proms this season, only one really stands out for attention, and it's this, Prom 56 with Semyon Bychkov. When Bychkov conducted Mahler in Cologne, I was disappointed, because he favoured Romantic repertoire. Last Proms, he conducted Mahler's 3rd, which I found too refined, but some of my friends loved. But Bychkov is an extremely important conductor, who has a lot to say in Romantic repertoire and opera. So I was thrilled by this Proms performance of Mahler 6. Oddly, in part, because Bychkov draws the parallels with Mahler 3. It's a wonderful insight.

Dispense with the usual maudlin sentimentality that attaches to this symphony, typical of the period. It's good to know what the hammerblows mean and that the symphony's called the "Tragic" but such myths detract from what's really in the music. As pure music, Mahler 6 is remarkably well-constructed, themes interweaving in constantly repeated patterns, which develop imperceptibly towards resolution. Since it's Mahler, it can't be purely abstract, though a straight autobiographical programme is misleading. Interpretation depends on understanding Mahler's music and mindset on a much deeper level. Whatever Haitink may say, everyone interprets. You can't even read a score without interpreting how the marks fit together. Only a machine doesn't "interpret". What I liked about Bychkov's interpretation was that it evolves from the music itself, rather than what Bruno Walter, or Alma, or anyone else might say.

Right from the start, Bychkov goes for the attack. The powerful opening march leads into a quieter theme - not passive, but contemplative. Then a third, expansive theme, often called "alpine", sounds heard from a distance. Hence cowbells and distant natural-sounding trumpets. These three themes interact throughout the symphony, providing a kind of inner skeleton, the "backbone" of the piece. Bychkov's entry is very bright and assertive. Immediately you sense this won't be a doom laden  wail. Mahler wasn't like that. For all his ruminations on death, it's life he's interested in, and its continuation in other forms after death. Hence the marches that run throughout most of the symphonies. Marches aren't necessarily military. Bychkov's march isn't ragged but elegant, even classical. The Mahler 3 connection becomes clear. (Please see what I've written about that on the labels at right) This isn't barbarism but purposeful forward thrust. It's orderly even though it's relentless. Is this the march of time or of nature ?

After the assertive first movement, Bychkov chooses the Scherzo. In this performance, it makes sense because it keeps up the energy levels, and develops the themes of the first in new ways. Placing the Andante third thus gives respite before the explosion that is the Finale, like the first "allegro energico". Classical structure again, right for this performance. Bychkov keeps this Scherzo almost blindingly bright - sharp, clean playing from the BBCSO, flagship of the whole BBC orchestra fleet. This emphasizes the troubling nature of this movement. It's as if unnatural light is throwing shapes into surreal contrast. Here, the march morphs into screams, repeated shrilly. The brass blare then fall into dizzying diminuendo. The percussion sound deliberately wooden. This is altväterisch, a very Austrian expression evoking nostalgic pastoralism. Yet it's not purely for ethnic colour, since Mahler knows very well that folk sounds aren't nearly as complex as full symphonic expression. Perhaps the hollow knocking is a reminder of a heartbeat, or a precursor of the hammerblows to follow. The "alpine" theme emerges quietly, very much alone amid the tumult, and it, too, spirals downwards. The mysterioso seems haunted. Yet the march returns, uncowed. This doesn't feel like a defeat, but a strategic retreat, which again makes sense of Andante before Finale.

After that Scherzo, the Andante does not seem like peace. Bychkov's poise in the Andante implies that the warmth of this alpine summer is fragile, as summers are in the mountains. The delicate balance is soon ruffled by sweeping chill. Yet the march themes remind us that time, or weather, or life, moves ever onwards.  The surging vigour of the march returns, suggesting that whatever might lie ahead shall also pass. The mood is quieter, but uncowed. 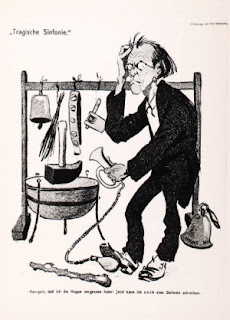 The attack that started the first movement returns at the start of the Finale. It's a monumental statement but again is carefully structured. Cowbells suggest the countryside, simple sounds (like heartbeats) underlying the sophisticated achievement of grand symphonic form. They're not just for decoration. The cartoon makes fun of the cowbells and hammer blows in this symphony, but the subject is complex, and worth discussing in depth. Another time ! Bychkov's clarity shows how carefully Mahler 6 is constructed, everything integrated. The trumpet calls refer to "music heard from afar" and also to communication between horns in the mountains, and even perhaps to cosmic trumpets heard from heaven. The celeste suggests otherworldly sounds, wafting from heights unknown. Marvellously brash discords melt into mysterious murmurs.

The march theme returns again, bright, sharp, almost demonic. Bychkov makes it burst with the vigour we associate with the onward march of spring in Mahler 3. Trumpet calls in marches function to rally forces onwards, and whip them into action. The march in this Finale grows ever more strident and energtic, so the dizzying, blinding flash that cuts it off comes as an absolute shock. Silence. Hammerblows. Silence.  Perhaps the hammerblows signify a heart attack or sudden death.  Certainly they're heart-wrenching because they mean the end of all that remarkable music. Yet remember that marches continue relentlessly, marchers who fall replced by new. Mahler's marches are surges of creative energy that cannot be dimmed.

Please see lots more on this site about Mahler and related subjects. My life work, in  a sense.I'm just passing on what I've learned so it might help others. I cover about 40 Proms each year. Please take a bit of time and read more.
at August 27, 2011

Absolutely with you.... this was a triumphant 6, no sentimental doom from the text books. It had a kind of manly pride in its own sensitivity, drawing parallels with Bychkov's character and perhaps the true living Mahler you allude to here. Thanks for being there!