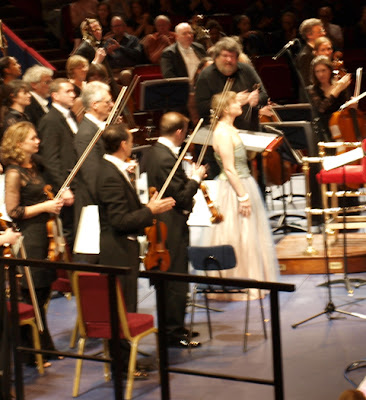 Oliver Knussen is one of my main Proms highlights every year because he's just so much fun! BBC Prom 19 on 29/7 no exception. Honegger, Frank Bridge, Berg, Castiglioni and Debussy? Ollie's trademark is the wit with which he puts programmes together, often so they work on several different levels,, like an intricate puzzle. This takes brains. So catch this Prom on BBC Listen again til Friday.  On radio, you get to hear Knussen talk as well. It's an education. He puts on a bumbling persona, but inside, there's razor-sharp intelligence and formidable understanding of repertoire.

Listen to what Knussen says about Honneger's Pacific 231. Please follow this link to the original film of Pacific 231 made in 1949. Knussen's conducting the same notes but the piece sounds quite different because he's making a connection with the rest of the programme. This piece isn't "about" trains, as Honegger himself said. It's also a study in parallel perceptions of tempo. When you speed along in a train, the landscape seems to whizz past. But in fact the landscape barely moves. Honegger's writing the musical equivalent of optical illusion.

"Modernist Pastoral" says Knussen, reinforcing the idea with Honneger's Pastorale d'été. "An alpine pastorale", says Knussen, "with yodels". Knussen's either clairvoyant or he knew that the BBC Proms this year would include alpine fantasies like William Tell. (Honegger's Swiss).  It doesn't matter. What's interesting here is the way Knussen brings out the keening, soaring legato, so the piece seems to open upward and outward. It feels "observed" and organic. So it falls into place with Debussy's grand La Mer and Frank Bridge's delicate There is a Willow grows aslant a Brook. All three very different pieces, but all tone poems. Since there's lots of Frank Bridge maybe Knussen has an inside track.

Pairing Frank Bridge and Alban Berg? That's a challenge but Knussen pulls it off. Bridge's There is a Willow grows aslant a Brook. seems idyllic on the surface, but was written with the image of Shakespeare's Hamlet Ophelia in mind. Ophelia floats along a limpid brook. But she's dead. Those shimmering surfaces are like the "haze" that rises from Honegger's summer meadow. "This piece plays itself", says Knussen of Bridge. Listen as the textures become more dense and low woodwinds introduce chill. Not a mindless reverie at all. Was this where Britten learned how to put poisoned innocence into music?

And so to Berg's Der Wein. In its "prison de verre" the wine calls out, beguiling the drinker to lose his inhibitions. Rich, luscious orchestration, appealing to those who'd like to rebrand Berg as a New Romantic, and write Schoenberg out of history. But, as Knussen points out, the pitch is a tad too low for sopranos to feel comfortable, creating danger and discomfort. Claire Booth's voice isn't opulent like Jessye Norman's but she brings out the tense vulnerabilty at the heart of this set of songs. Like Lulu.  Der Wein can be heard as a study of parallel realities, coded secrets and intricate symmetries. Berg and Knussen have a lot in common!

From wine in verre to Inverno in-ver, Niccolò Castiglioni's 11-part contemplation.  Titles like "Flowers of Ice", "Winter", "The Frozen Lake". Is Castiglioni nature painting? Extremely hgh pitches. Sharp, sparse textures, sudden flurries where tempo shatters the line. Sounds we've become used to associating with ice, snowflakes, frozen planes of water, even bells heard from a distance. Inverno in-ver is airconditioning in sound. The BBC Proms should bring it back each summer when the Royal Albert Hall swelters.

Yet Castiglioni frequently writes pitches almost too high for the human ear, and often relies on minimalist orchestration favouring percussion, or strings, or piano (Castiglioni's instrument)  used as percussion. Modernist tone poem this may be, but there's more to it.  Note the last three segments, "Silence", "An old Adagio" and "ll rumore non fa bene. Il bene non fa rumore" (Noise does no good. The good makes no noise). For me the essence of Castiglioni's music for me is this "still, small voice of peace", more powerful than bluster.

"Castiglioni's like Vivaldi, pitches rising higher and higher with each passing century" quips Knussen. The comparison is apt, for Castiglioni's music feels eternal, transcending time and place. Knussen is one of Castiglioni's big champions, so he gets an amazingly  idiomatic performance from the BBCSO! Single chords stretched so they oscillate, single notes precisely applied. Inverno in-ver is exqusitely beautiful. I've been playing this over and over on repeat, it's so fascinating and inventive. Read more about previous London Castiglioni concerts HERE.

"Lots of moistness in this programme", says Knussen, " brooks, lakes and La Mer".  But the connection goes deeper. "Ravel blends", says Knussen, "Debussy superimposes". Debussy's textures move because they are transparent. Knussen keeps them clean and pure, so the effect is crystalline. Maybe some would prefer an interpretation with more glamour, but Knussen's La Mer connects to the rest of this programme - lines that cross and co-exist, themes deftly defined. Impressionist painting revolutionized art because the colours weren't smudged and seemed shocking modern. That's why Debussy's called an Impressionist. Castiglioni is a Debussy in his own way, even more so than a new Vivaldi.

Re pairing of Bridge and Berg: as Knussen pointed out, there are distinct echoes of Wozzeck in the Frank Bridge. I particularly liked K's remark that Pastoral d'Ete -I think it was that one- reminded him of the music to Dr Finlay's Casebook. Youtube makes a direct comparison possible:

Hi Dominic ! Knussen is also showing that Bridge had a strong European and modern attitude, which rubbed off on Britten who never was going to be a 3 Choirs type. Elgar and Parry did too, but that's forgotten these days when the media try to insularize English music.

I liked much the songful quality of "La Mer". When I listen to it I can hear many a sailor's song in "De l'aube à l'après-midi sur la mer". Imaginative program that opens doors. Thank you for your recommendation.