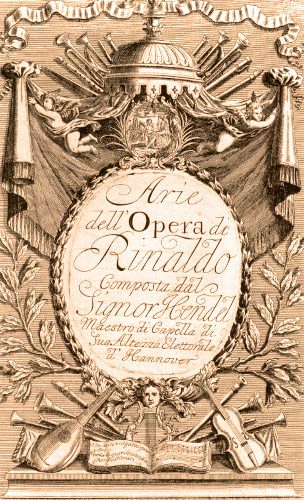 Less is more! If ever there was a case to be made for semi-staging, this Prom 55 version of Handel Rinaldo from Glyndebourne proved it. The original Glyndebourne full production was strikingr in parts (please see review HERE) but conceptually flawed.  Handel's glorious opera works because it's hyper-fantasy. Knights, enchantresses, magic, battle scenes, mountains, oceans, anything but literal realism. Handel's audiences had no delusions that the opera and all the other Orlando sagas based on Tasso, had anything to do with historical fact. Handel's audiences thought of the past in terms of Classical Antiquity and Arcadian Idyll so they couldn't have cared less for the faux-profound statement emblazoned across the stage "Were the first Crusades the result of...........".

That's the fatal flaw in Carsen's staging, from which all other horrors (and high points) flow. Reducing the opera to schoolboy dream sequence delimits the fantasy. Bruno Ravella does away with Carsen's excesses, creating a semi-staging that's even more dramatic than the original. Instead of silly gimmicks like bicycle shed battlegrounds, he gets closer to the fundamental fantasy that is the essence of baroque.

Ravella's semi-staging also places more emphasis on the singing, which was more spontaneous than in the original staging. Maybe it's the "end of term" factor, since the Glyndebourne season ended last week. Maybe it's because I was sittting face level with the singers barely a few metres away. But the singing seemed much freer and more exuberant than before, which is a good thing.

This time, Sonia Prina came over much more effectively. I'm even more convinced now that Carsen might have designed the whole production around her. She is a major Handel singer in Europe, and has worked with Dantone and Carsen before, so you can understand why they wanted to make the most of her assets. Freed of having to play along with the schoolboy business, she sang with greater vigour than before, demonstrating why the role isn't necessarily territory for counter tenors like Andreas Scholl, divine as he is. Prina's a woman, but conversely brings out the gutsy, masculine forcefulness of the role.Handel's audiences related to heroes with high, ethereal voices, but Rinaldo's still a fighter and a hero.  Prina's long Cara sposa was very well phrased, demonstrating solid technique and breath control.

Juast as Luca Pisaroni's Argante was getting into his stride in the very difficult Sibillar gli angui d’Aletto, the atmosphere was destroyed by three latecomers who were allowed into the front row of the auditorium. Pisaroni's much too professional to miss a beat, but this was extremely unsettling for others in the audience.  Later another group were let in on the opposite side of the hall, also heading for seats in the middle near the front : maximum disruption. The BBC Proms management really must stop this, which has been happening far too frequently this season.. It's completely unfair on the rest of the audience and on performers. Whoever manages the ushers should make it clear in no uncertain terms, absolutely no late entry til the interval.

This stellar moment was ruined, despite Pisaroni's poise, but the beauty of his singing revealed itself elsewhere, such as the tender richness of  Coma a tempo giungesti  Argante's a complex personality, and the role comes alive created with depth and sensitivity.

Clad in black bondage gear, Brenda Rae created Armida-as-Dominatrix. She's a fabulous actress, and Ravella's semi-staging made the most of her stage presence. Holding a cane, she walks round the audience, like a demented schooltreacher looking for victims to hit. It's a wonderful performance, but the relevance to Handel is marginal. Armida is cruel and powerful, but there's also more to the part. Significantly, Handel interjects long passages for solo harpsichord between Armida's passages. It's a crucial moment in the drama, for Armida's starting to think. Dantone's been playing continuo all along, but now the singing has stopped, she's listening.

The Orchestra of the Age of Enlightenment are among the best period instrumentalists in Europe (ie the world)  and anything they do is worth hearing, whatever the setting. Wonderful, assured playing, deftly conducted by Dantone. The orchestra creates Almirena even before she comes on stage. Amazingly natural sounding bird song, depicted by sopranino - not flute, not recorder but unique. When Anett Fritsch starts to sing Lascia ch'io pianga, she's haloed by the magical sound around her.

Tim Mead's Eustazio also blossomed in this Proms performance, freed from the silly changes of uniform.  He's not as stratospheric as, say, Jaroussky or Scholl, but absolutely convincing. Varduhi Abrahamyan sang Goffredo. One of the joys of Rinaldo is that Handel writes start turns for every part. Hence William Towers as the Mago, a Christian version of Armida.  Anyone who still thinks historical realism hasn't heard this part. Would Goffredo and Eustazio have been able to cross seas and mountains to save Rinaldo but for the Mago's magic ? It's not God who saves this hero, nor logic.

Prom 55 Handel Rinaldo was by far superior to the full production because it expressed the true spirit of the opera and its period. Unfortunately, Bruno Ravella, stage director, had to retain the main elements of Carsen's original (schoolchildren, S&M violence) because that was the brief, however confusing it might have been for the audience. But the compensation was that the singing, playing and essential drama came to the fore. (LOTS more on Handel, stagecraft, baroque and the Proms on this site. Please explore )