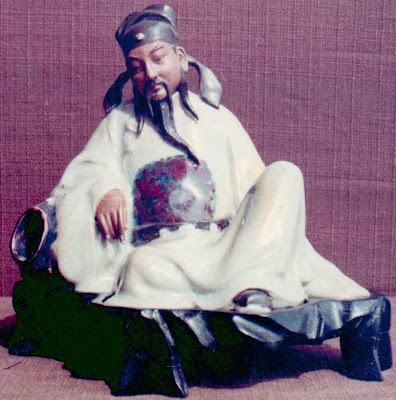 For a placid soul, Bernard Haitink never ceases to surprise. After all these years, you'd think you can predict what he'll do, so you don't go and he pulls off something wonderful, And then you go and get disappointed because he's off on a limb. But that's a better thing than if he churned out the same thing all the time. Now he's getting older and frail - he avoids the steps up to the stage as much as possible - you feel you want to hear him regardless, for old times' sake if nothing else. And he still delivers.

Although Haitink has conducted Mahler's symphonies countless times, his forays into Das Lied von der Erde have been less frequent. His recording with Janet Baker was so long ago, it doesn't reflect what he does now).This isn't an ordinary symphony, but a song symphony where songs act as movements. It's certainly not operatic, but the predominance of words shows that Mahler is trying to emphasize meaning. This isn't abstract sound, but has purpose. Metaphysics as music, perhaps.

Although there are no "characters" in this piece the interplay between male and female voices is significant on a deeper level than vocal balance. In Das Trinklied, the symphony is fully "of this world" seeking escape. In Der Abschied, Mahler finds transcendence in images of eternal renewal. In between these poles lie the four songs which mark a passage from past to future. Der Abschied itself develops over a series of stages, until the resolution, which then floats away in that miraculous ewig... ewig...... when sound itself dissolves into the silence of infinity.

So Das Lied von der Erde is more than symphony but a strange new hybrid of music and song. Perhaps the closest equivalent is Kindertotenlieder, where five songs form a transition from dark to light, from harrowing grief to deeper understanding. Pierre Boulez once said he found his way to Mahler via the songs, which is perceptive, because song in Mahler is crucial.

In many ways, Das Lied von der Erde operates as three units - conductor and orchestra, and the two soloists. People often joke that there hasn't been aa perfect performance because none has managed the perfect combination, and to some extent that's true, to varying degrees, and usually it's a mixture of all factors. Often the weakest link is the tenor, because the all-important Abschied belongs to the female voice. But as I've written before, it's a kind of tradition that tenors don't understand what the drunken poet represents, and sing with too much luscious charm. Li Bao is no Mario Lanza. Even Jonas Kaufmann made a mess of the cycle at Edinburgh a few years back.

Tonight's tenor, Anthony Dean Griffey, stepped in for Robert Gambill at short notice, but he's sung the part many times. If anything some slight stiffness in his voice in the first song helped dispel the soft-grained cosiness that marked Robert Dean Smith's performance with Haitink a few years back. Although there were balance problems with the orchestra at first, Griffey and Haitink judged each other more carefully fairly soon into Das Trinklied. In Von der Jugend, Griffey was more at ease because it's a wonderfully vivid song. If its true depths weren't reached, it's no discredit to him, as only a very few singers have achieved that feat. When the concert is broadcast (BBC Radio 3, 22nd October), the miking should show what was lost in the acoustic of the Barbican Hall.

Only a few years ago, Christianne Stotjin made her first high-profile UK debut at the Oxford Lieder Festival, where many new singers have made a name. She's sung with Haitink many times, so she was the reason I wanted to attend this performance. In Der Einsame im Herbst, she had moments of uncharacteristic clouded diction, but in the Abschied she showed why she's one of the leading Mahler mezzos around. She saved Vladimir Jurowski's recent Mahler 2nd almost single-handed.

Perhaps something was clouding the beginning of this Das Lied orchestrally too, as there were a few close calls before the first song pulled together. As usual with Haitink, orchestral soloists were showcased to advantage, through the conductor's lover of fine detail. Haitink doesn't hurry. He'll sacrifice thrust for pointillist perfection. Once I heard him conduct the first movement of Mahler's 2nd so slowly that the line began to break up, and the players could barely sustain the legato. Yet it worked, in the end. With some orchestras this isn't a good idea, but with the London Symphony Orchestra, where standards are so high, this attention works well. I've never heard the double basses quite so chillingly hollow as in the passages in the Abschied which mark the transit from one plane of existence to another. Ir takes some doing to get instruments as naturally resonant as these to sound like harbingers of death. Not a pretty sound at all, but well judged: a pity that more conductors don't realize that the beauty of this music masks traumatic fear of the unknown.

Repeatedly, Haitink's left hand fluttered downwards, keeping the orchestra in check, pacing an Abschied as solemn as a procession. For procession it is, with carefully gauged stops and starts and subtle changes of emotional direction, until the music enters another place, filled with light and freedom. "Die liebe Erde" sang Stotjin, her face aglow. Clearer and brighter came the textures in the orchestra. "Allüberall und ewig". Rich, round vowel sounds evoking the richness of spring and the promise of harvests to come, and the ripening of vines as yet unknown.

Before Das Lied von der Erde, came Schubert's 8th, the Unvollendete. Perhaps because I love the melody in this so much, I expect it to be played with lively vitality. This time Haitink's discretion didn't work for me, because he smoothed out the quirky kinks I like so much in this piece. Recently some survey said people like classical music because it's "relaxing", and this performance certainly was. Maybe I was too fired up for Mahler to relax enough to enjoy it. Please read about Haitink's M9 at the Proms HERE
at October 12, 2009

incidentally, gambill was out sick again tonight (10/23) on the same program at lincoln center. not only that...we were told before "das lied" that gambill's sub (richard margison) was ALSO sick, and to "please excuse him".

who did they get in the end ? Christine schafer cancelled Mahler 4 in London and but at least in the US the last minute substitute was Miah Persson who is wonderful in that piece

margison still sang in gambill's place. i thought the "please excuse him" announcement before he came on was a little amusing. and when stotjin didn't get swallowed up by the orch., she was pretty great.